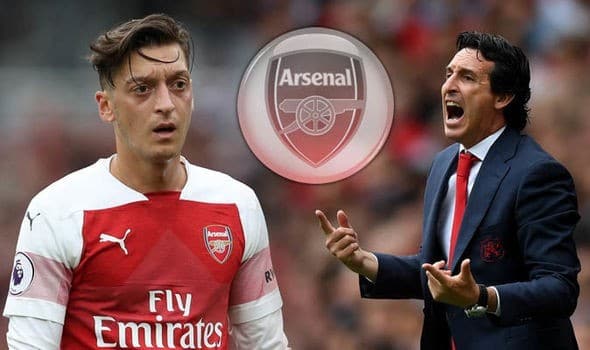 A colossal summer awaits Arsenal and with a failure to ensure Champions League football leaving Unai Emery with an insufficient transfer budget, a few high-profile, underperforming stars will have to be ushered out the door to make way for much-needed fresh blood.

In terms of their influence, they were polar opposites; Hazard was the star of the show, while Ozil was completely anonymous. This should be his final game for the Gunners.

Time and again, Özil has proven that he is not a playmaker capable of building a team around, despite his gigantic £350,000 weekly wages.

With budgets stretched, Özil should top the list of players Emery drops this summer.

The problem is, who exactly is going to take him?

The time may well have come for another long-serving fan favourite to pack his bags and say his goodbyes.

Following his recent injury history, Koscielny is not the player he once was.

Koscielny’s contract is set to lapse next summer, which if he sees it out will take him to a decade of service for the Gunners.

Now is not the time for sentiment and Arsenal must make hard decisions to freshen up the squad.

Arsenal are understood to have activated an optional one-year extension to Nacho Monreal’s contract, which like Koscielny means his existing contract is set to lapse next summer.

However, he too has shown signs of wear and tear in recent months.

Particularly in the Premier League, the full-back positions is one of the most physically demanding positions in modern football.

Whether Monreal still possesses the capabilities to perform in such a dual role is questionable.

With Sead Kolasinac also flattering to deceive, it is little wonder that Gunners have been linked with Ajax’s all-action Argentine Nicolas Tagliafico in recent months.

Monreal has been linked with a return to Spain and this summer would represent Arsenal’s final opportunity to sell him for a fee.

During his three seasons in north London, Xhaka has shown he is more than capable of lashing a long-range screamer into the top corner, yet those precious moments have failed to really conceal the deficiencies elsewhere in his game.

However, like too many others in a Gunners shirt, Xhaka underwhelms and leaves fans wanting more far too often.

At 26, Xhaka would have no shortage of takers, particularly from the Bundesliga where he previously flourished and he could extract a reasonable fee if sold.

Shkodran Mustafi has been an out-and-out disaster since his move to the Emirates.

Although he is usually very good in the air and is an accomplished distributor of the ball, Mustafi’s decision-making and regular slips in concentration are those that one might expect from a rookie just starting out rather than a 27-year-old who cost £35m.

As the most error-prone performer in a team packed full of them, Mustafi’s time at the Emirates is definitely up.