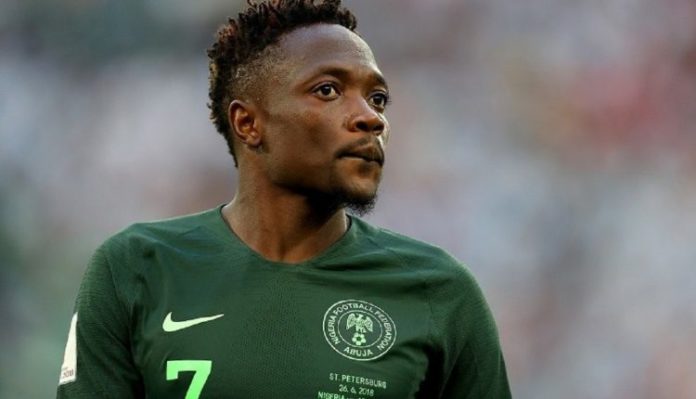 Ahead of the Super Eagles’ crucial Africa Cup of Nations qualifier against South Africa at the FNB Stadium (Johannesburg) on November 17, Al-Nassr striker Ahmed Musa says he still harbors hard feelings for the Bafana Bafana.

The Al-Nassr striker says he would love to revenge the Super Eagles loss to South Africa in Uyo in June 2017 once action resumes in the Africa Cup of Nations qualifiers as he played only as a replacement for Alex Iwobi in the 59th minute.

In an interview, Musa told Channels Television : ”South Africa are under pressure not Nigeria, so I think next month we are going there even for a point.

”We remember what they did to us in Uyo, we are going there for revenge.”'

Musa was delighted that Nigeria won their third match on the spin and attributed their success to their determination and has praised the young players.

”We got the three points, we talked to ourselves in the beginning of the game that we need the game.

”We don't have to lose, if we are not getting a win, let's go for a draw but in the 81st minute we got the win and we are very happy for the win.

”I think the major strength in the Super Eagles team is that most of the players are young and everybody is ready to play no matter how many minutes the coach gives to you.

”As you can see there was a little tiredness in the team against Libya, it is not that easy to play in three days. The important thing is the three points,” he concluded.

At the end of four matches in the 2019 Africa Cup of Nations qualifiers Group E, Nigeria lead with nine points, while their next opponent, South Africa, is on eight point.