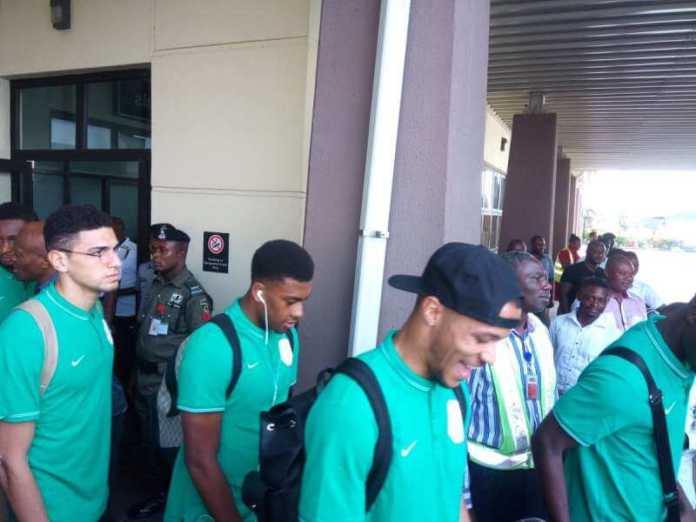 Super Eagles of Nigeria have landed in Sfax, Tunisia ahead of tomorrow’s 2019 Africa Cup of Nations match day four clash against Libya.

The Nigerian national team boarded a Max Air aircraft that took off from Uyo and had a stopover in Kano to refuel touched down at the Sfax Airport at 4pm Nigeria time (same as Tunisia).

According to Completesports, the players and team officials immediately headed to their Zeitouna Hotel abode for a short rest before the official training session.

Ogenyi Onazi and Abdullahi Shehu were not part of the squad that touched down in Tunisia.

Another win will see the Super Eagles earn nine points from four matches with two matches (against South Africa and Seychelles) to play.

The three-time African Championship will have their first training session by 7pm ahead of the game.

Super Eagles are currently second in Group E with six points from two games following their 4-0 thrashing of Libya in Saturday’s clash at the Akwa Ibom international stadium in Uyo.

South Africa who spanked Seychelles 6-0 at the FNB stadium in Johannesburg last Saturday will face Seychelles in Victoria in the other group fixture and top the group with seven points from three matches while Libya are third with four points.

Seychelles are at the bottom of the group with no points earned from three matches and they have a -13 goals deficit.