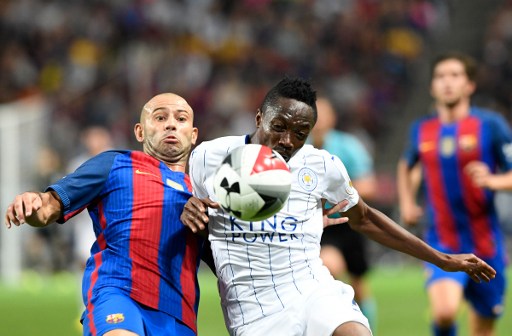 Ahmed Musa was in tune for his Saudi Arabian club Al-Nassr on Friday afternoon as he created an assist in their 4-0 crushing of visitor, Al-Raed.

Al-Nassr took the lead after just 8 minutes when Hamdallah opened the scoring from twelve yards to give them a 1-0 lead before he then fired into an empty net two minutes into added time to double their lead after being put through by the Super Eagles winger.

The forward then got his hat-trick one minute later to complete a resounding first half which saw the hosts go into the break with a healthy 3-0 lead.

The second half picked up from where the first stopped when Hamdallah scored Al-Nassr's fourth, skillfully volleying home a magnificent assist from Hamed Al-Mansour to complete the resounding victory.

Musa was on for 88 minutes and was replaced by Firas Albirakan.

The Nigerian had a game rating of 7.2 and Musa has now been directly involved in 9 goals since his switch from the King Power Stadium last summer.