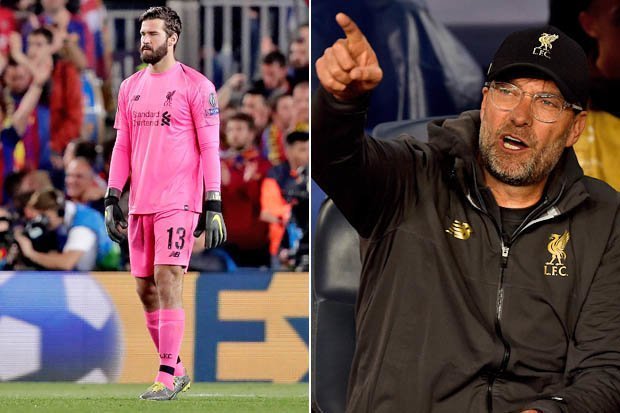 Goalkeeper Alisson Becker refused to go up for a Liverpool corner kick in the last minute of stoppage time last night, according to BT Sport commentator Steve McManaman.

Liverpool were 3-0 down in the first leg of their Champions League semi-final with Barca when they won a free-kick deep into the fifth minute of stoppage time at the end of the match through Mo Salah.

Jurgen Klopp could be seen on camera whistling and pointing for Alisson to join his team-mates in the Barcelona box in hope of giving them a numerical advantage as Liverpool sought an away goal to take back to Anfield.

Though BT’s cameras did not show Alisson, Liverpool legend McManaman pointed out how the goalie refused his manager’s commands.

The Brazilian shot-stopper then grudgingly began to make his way towards the Barcelona half before Salah noticed him and refused to take the corner until he backed off, wary that a fourth Barcelona goal would definitively kill the tie.

Co-commentator McManaman said: “Jurgen’s pointing at Alisson to get in the box as well, and Alisson just said no to him!

“Now he’s going. He’s been told no again. Salah said no to him this time.”

Freelance journalist James Nalton, who was in the Nou Camp press box, meanwhile tweeted: “Alisson nearly went up for that corner at the end. Reached half way then changed his mind.”

Liverpool must now win 3-0 at Anfield next Tuesday to take the game to extra time, while a 4-0 win would take them through without the need for another half-an-hour.

Should Barca find the back of the net on Merseyside once, however, the Reds must win by four clear goals to progress.