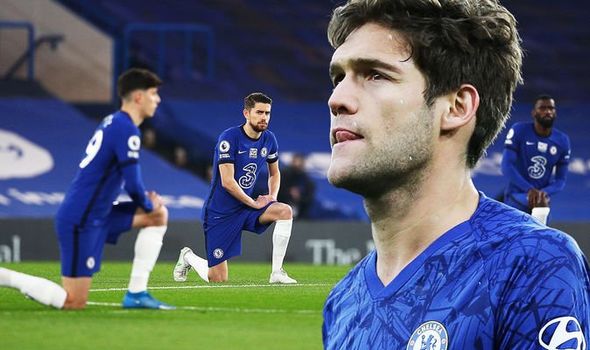 Chelsea's left-back, Marcos Alonso, has said he will stop taking knee because he feels the gesture of taking knee is ‘losing strength'.

Alonso further insisted that he will instead point to the Premier League ‘No Room for Racism' badge on his sleeve, while other players kneel ahead of kick-off.

Recall that since the Premier League resumed in the summer of 2020 after a coronavirus-enforced break, players, officials and staff players in the Premier League have been taking a knee to show support for the movement for racial equality.

The Chelsea defender is the second player after Crystal Palace's Wilfred Zaha to stop taking a knee. The Eagles' winger has since March stopped taking a knee ahead of Premier League matches.

Zaha said he sees the gesture as part of the match routine and that it doesn't matter whether players stand or kneel, a lot of them still fall victim of racial abuse.

While speaking to the media on Monday, the Spaniard said he had not discussed his decision with any of his Chelsea teammates, several of whom have been victims of racial abuse.

“I am fully against racism and I'm against every type of discrimination, and I just prefer to put my finger to the badge where it says no to racism like they do in some other sports and football in other countries,” Alonso said.

“I prefer to do it this way and, of course, to say very clearly that I am against racism and I respect everybody.”

When he was asked whether or not his decision to stop taking the knee had anything to do with politics, Alonso said: “I don't know, I just prefer to do it this way. It's my way to do it, I think it's another way.

“And maybe I think it's losing a bit of strength the other way, so I just prefer to do it this way and to show I am fully supportive of fighting against racism.”

The 30-year-old, who had fallen out of favour at Chelsea under Frank Lampard before Thomas Tuchel's arrival last season, has made a strong start to the 2021/22 campaign, starting all five Premier League games ahead of England defender Ben Chilwell.