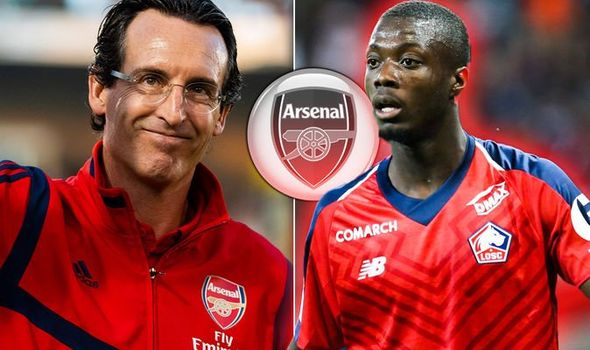 According to reports, Arsenal are eager to submit a fresh offer for Kieran Tierney and are actively looking to buy another centre-back as Unai Emery looks to bring in two defenders after settling a deal for Nicolas Pepe.

Pepe has been caught at London Colney this afternoon having landed in London to undergo his medical after agreeing a £72m deal with Lille for the Ivory Coast international’s signature.

The summer spending isn’t going to end there as the Express claims the Gunners are set to table a fresh offer for Tierney having already had two bids for the left-back knocked back by Celtic.

The paper says the SPL champions are holding out for about £30m but Gunners are hoping to drive that asking price down and will tender an offer worth closer to £25m at some point this week.

Tierney has been identified by Emery as a long-term replacement for Nacho Monreal and the 22-year-old would be an exceptional addition to the team as he’s been one of the best left-backs in British football in recent years.

The Express says there is growing confidence among Gunners chiefs that a deal will ultimately be agreed with Celtic before the transfer window closes on August 8th so it looks like Tierney could soon be following Pepe to North London.

In addition to Tierney, the BBC says Gunners are also still in the market for another centre-back this summer as they are in talks with some clubs over the sale of Shkodran Mustafi.

The German defender has been a disastrous signing since arriving from Valencia and while he’s interested to stay at the club to prove himself, the BBC claims Arsenal want to find a club to take him on loan or on a permanent deal.

With Laurent Koscielny trying to force a move back to France and Mustafi probably leaving, it makes sense that Arsenal are trying to sign an established centre-back but the BBC doesn’t give away any names of possible targets.