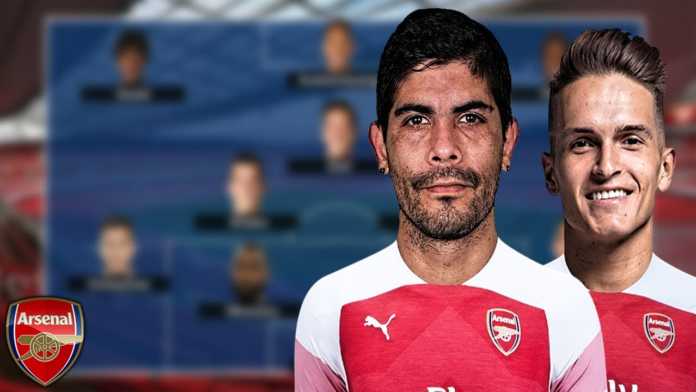 Arsenal look to push through a deal for Denis Suarez before the end of the month.

The Barcelona midfielder is well known to Unai Emery, having spent a season working with Arsenal’s head coach while he was on loan with Sevilla.

Talks are continuing between the two clubs, but a deal has yet to be agreed – with Arsenal hoping to land the 25-year-old on loan until the end of the season with an option to buy. Barcelona, nonetheless, want to sell the midfielder this month.

Here is how Arsenal could set-up with Suarez in the side, that is if a deal gets over the line before the end of the transfer window.

Unai Emery said after the win at Blackpool that he views the 25-year-old as a wide player.

When asked by football.london what he thought Suarez’s best position was, Emery said: “He was playing in his career, and also with me also, as a right or left winger.”

Emery having said that, the most likely position for Suarez in the current Arsenal side would be on the right side of the attack, providing Emery reverted to the formation he used during the early months of the campaign.

He can obviously also play on the left of the attack and in fact, that would be the role he prefers, as when he is on the ball he likes to cut in on his right foot.

But given Nigeria’s Alex Iwobi’s form this season, a spot on the right is the more probable option.

When using the 4-2-3-1 option, Emery often went with Mesut Ozil as his No.10 – although at times he did also use Aaron Ramsey there.

But both players have found game time difficult to come by recently.

So Suarez, who loves to get on the ball and run at players, could be the player to slot in behind Pierre-Emerick Aubameyang or whoever is operating as the central striker.

The box to box midfielder

Suarez dons the No.6 shirt at Barca and he has the ability to play as an out and out central midfielder.

Recently, Emery has moved to play with three centre-backs, using wing-backs to provide the width which has been a success, with Sead Kolasinac and Hector Bellerin becoming more and more influential figures in the Arsenal attack.

Using that formation, Emery has sometimes gone with a midfield diamond, one that has seen Granit Xhaka at the base, with Lucas Torreira on the right and Matteo Guendouzi on the left.

Suarez possibly will slot into either of those roles, with the most expected option that he replaces Guendouzi.

Suarez, even though he is right-footed, does like to drift over to the left at times and then cut inside on his favoured foot, so he would be very comfy as part of that diamond formation.