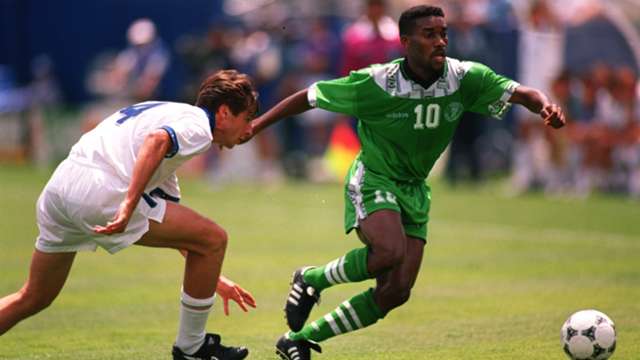 Super Eagles legend, Austin Okocha made a name for himself in Germany while playing for Eintracht Frankfurt before switching to Paris-Saint-Germain in 1998.

He later moved to England where he made exceptional landmarks with Bolton Wanderers before hanging his boots after a short spell with Hull City.

But while playing for Eintracht Frankfurt, the former Nigerian international scored perhaps the greatest goal of his career against former world best goalkeeper, Oliver Kahn.

In a match he came in as a substitute, Okocha dribbled the entire back-line of Karlsruhe including Kahn before firing the ball into the net to secure a 3-1 win for Frankfurt.

The goal was voted as 1993 Goal of the year by viewers of Sportschau (an ARD German TV sports programme).

Fast forward, 26-years later, Okocha, who is now 46,  gave the moment a daring reminisce with a funny live commentary.

Jay-Jay Okocha commentating on THAT goal he scored against Oliver Kahn ?pic.twitter.com/jCCxJr27pc

Okocha would be always remembered as an incredible genius who brought class to modern football.