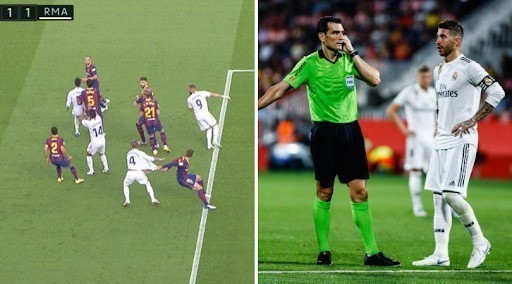 The official awarded Real Madrid a controversial 61st minute penalty after Sergio Ramos went down quite easily when Barcelona's Clement Lenglet took hold of the Madrid captain's shirt in the box.

After consulting VAR, Martinez Munuera gave the visitors a penalty at the Camp Nou to the disgust of many Barcelona figures, with Ramos stepping up to score the spot-kick to put Madrid ahead in Saturday's 3-1 victory.

Juan Ramon is also a former referee in the Spanish third division and was known to officiate matches wearing a Real Madrid shirt underneath his referee's uniform.

His other son, Miguel Martinez, was a linesman in Saturday's El Clasico as he lined up for the crucial El Clasico clash alongside his brother.

Barcelona have handed in a complaint to Spanish FA president Luis Rubiales about the officials' performance in Saturday's Clasico.

Barcelona manager Ronald Koeman took a similar tone in his post-match interview, claiming that VAR only acts against Barcelona in the Spanish top-flight.

Saturday's result took Zidane's side to second in LaLiga, with a game in hand and six clear of Barcelona – who lie in 12th spot.