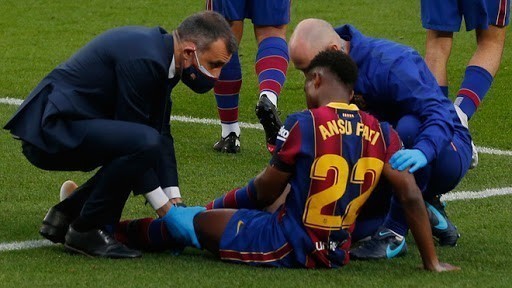 Ansu Fati will be on the sidelines at Barcelona for a long stint after the Spanish forward ruptured the internal meniscus in his left knee.

Fati will require surgery and will then have to recover for several months.

The 18-year-old forward will not play in 2020 anymore and he will have to focus on the second half of the season.

Fati was in Barcelona’s starting eleven on Saturday against Real Betis but had to be replaced at half-time by Lionel Messi.

He was then examined by the medical staff and the left-winger was sent to the hospital for further checks.

A scan of his knee confirmed that Fati ruptured the internal meniscus.

An injury like that requires between three to four months to recover from.

The injury means Fati will be unable to play in the final matches for both Barcelona and Spain.

Fati had received a call-up from Spain boss Luis Enrique to play in the Nations League next week which he will now miss.

For Barcelona, the youngster will miss the match against Atletico Madrid and the Spanish Super Cup, which will be held in January in Saudi Arabia.