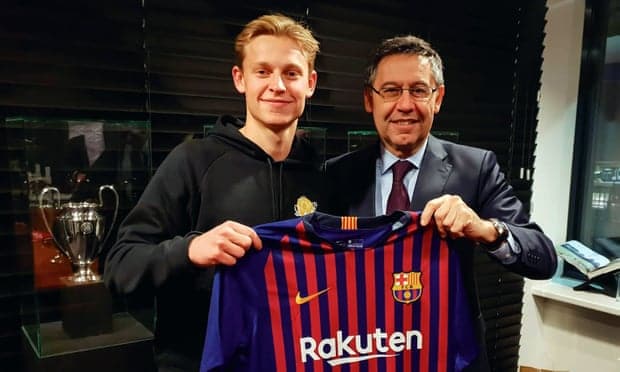 Barcelona surprised the footballing world by bringing in Kevin-Prince Boateng from Sassuolo on an initial loan deal.

Barcelona can sign Boateng for a £7.1m next summer, but that decision will hinge on whether the club can accommodate his wages and his form.

The Ghanaian midfielder appears to be a short-term solution, with highly-rated Ajax starlet Frenkie de Jong arriving at the Camp Nou in the summer.

The 21-year-old signed a five-year contract yesterday for a fee that could rise to €86m – he'll also be handed an massive salary.

Reports from Holland also suggest that Barcelona may look to bring in De Jong's current teammate Matthijs de Ligt, who would command a similar fee and wage.

The Blaugrana may have to sell some stars on their wage bill in order to overhaul their squad. As per AS, club president Josep Maria Bartomeu assured De Jong that players will be sold in order to maximise his minutes.

It seems they're prepared to sell three big stars, talking about the likes of Ivan Rakitic, Philippe Coutinho and Samuel Umtiti.

Rakitic is yet to sign a new contract, Coutinho is flattering to deceive on the pitch and Umtiti's injury record is really disturbing the club hierarchy.

The upcoming summer window looks like it could be a busy one for Barca, particularly as they still need a long-term successor to Luis Suarez.