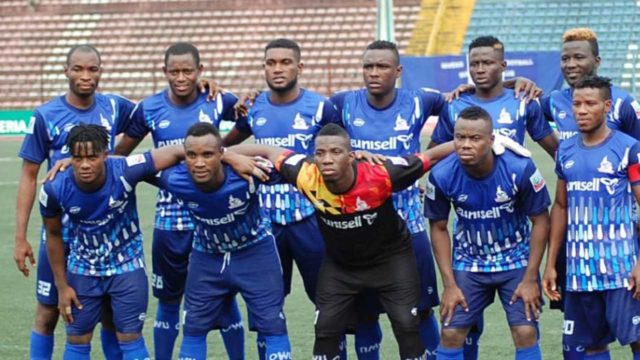 The chairman of Rivers United, Christopher Green, and captain of the team, Austin Festus, have both expressed their optimism about the qualification of the club to the group stage of the CAF Champions League.

The Stanley Eguma led side seem to have a slim chance of qualifying after their 1-1 draw against a top and experienced African club, Al Hilal of Sudan in Port Harcourt on Sunday.

But the chairman and the team captain has said that despite the result, Rivers United will still qualify all the way to the group stage of the CAF Champions League when they travel to Egypt for the return leg of the tie.

In a chat with the club's midfielder and captain, Austin Festus said “The players know what is at stake, that they need outright win before they can qualify and you cannot predict what happens next in football. If they (Al Hilal) can come and pick a 1-1 draw in our home, we can as well go over there and pick a win.

“So, I believe that we are going to get it right there in Egypt.”

He further called on Nigerians to support the team. “I want to appeal to all Nigerians not to write us off at this time, we need their support and prayers and we are promising them, come this weekend Rivers United will qualify at the expense of Al Hilal.

In the same vein, the former NFF Board Member and Rivers United Chairman, Christopher Green is hopeful that the Pride of Rivers have the squad that can pick the group ticket with a win in the second leg this weekend.

“I think the players are well motivated and focused on the task ahead. The supports they get from the governor, His Excellency Nyesom Wike, the management of the team and Nigerians are enough to spur them to victory in Egypt. We are optimistic that we can turn the table against them. It’s not going to be easy but it’s achievable.

“The governor has done well by motivating the team ahead of the second leg in Egypt which is a major factor in achieving the set goal.”

Whoever emerge as winner in the second leg fixture in Cairo this weekend will qualify for the group stage while the losers will drop to the CAF Confederations Cup group stage.