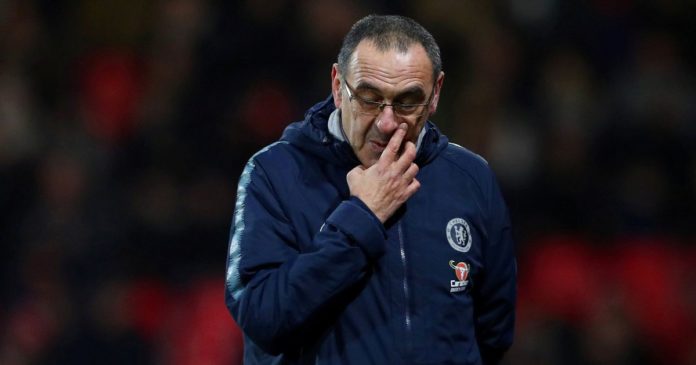 Chelsea board are unhappy with Maurizio Sarri over his treatment of Callum Hudson-Odoi and his decision to publicly criticise his players on several occasions this season.

Sarri is under pressure after Chelsea suffered their heaviest league defeat in 23 years with the 4-0 loss away to Bournemouth on Wednesday evening.

The Times claim the Italian will be given time to turn things around but there is growing unease at some of the 60-year-old's methods both on and off the pitch.

The report claims that Sarri's decision to scarcely utilise Callum Hudson-Odoi in the first half of the season has made Chelsea's hierarchy sad.

Chelsea are desperate to fend off interest from Bayern Munich and get Hudson-Odoi to commit to a new deal, but the winger is keen to join the Bundesliga champions and handed in a transfer request last week.

Chelsea's board are also said to be unhappy with Sarri's decision to criticise his player in public after their negative results.

Following the defeat to Bournemouth, Sarri went as far as claiming that his players had not even learnt the basics of his style of play.

February 18, 2022
July 30, 2019
Home Football News Chelsea Board Unhappy With Maurizio Sarri Over Two Of His Decisions