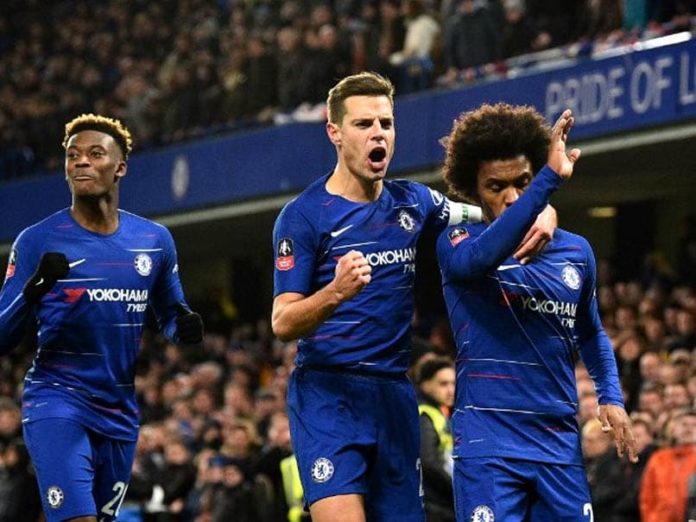 Chelsea will host Huddersfield Town at Stamford Bridge on Saturday afternoon hoping to return to winning ways after a disastrous outing against Bournemouth in midweek.

The Blues are expected to line up in a 4-3-3 formation with Willian coming back to feature in Sarri’s first-team this weekend.

Kepa Arrizabalaga should be in goal for the home team this weekend after conceding four goals in his last outing against the Cherries in midweek.

Chelsea boss Maurizio Sarri might choose to start with the defensive duo of David Luiz and Antonio Rudiger who would both operate as the centre-backs.

Cesar Azpilicueta should retain his place on the right side of Chelsea’s backline, but he needs to have more of an impact in the opposition half. Emerson Palmieri should maintain his spot at left-back.

The midfield trio of Mateo Kovacic, Jorginho and N’Golo Kante should hopefully keep their place at the middle of the park despite putting in a woeful display in the second half of their match against Bournemouth on Wednesday night.

Both Eden Hazard and Willian could feature as the wingers in the attacking end of the pitch as they look to create some opportunities for Gonzalo Higuain who will operate as the centre-forward up top.

The Argentine striker’s debut for Chelsea in the Premier League did not go according to plan as he ended up playing for 65 minutes without threatening too much inside the opposition penalty box.