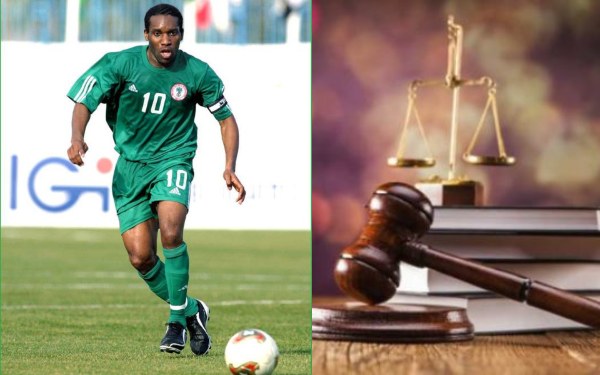 A Lagos State Prosecutor, Mrs Y. A. Pitan, has told an Igbosere High Court in Lagos that former Super Eagles captain, Austin Okocha, has not liquidated the alleged tax debt he owed the state, Punchng reports.

Pitan told Justice Adebayo Akintoye on Tuesday that the former footballer had visited the Lagos Internal Revenue Service office but failed to settle the 2017 income tax.

“The LIRS informed us that the defendant (Okocha) visited their office. He went there to reconcile accounts but has not settled yet,” she said.

The prosecutor said Okocha had also failed to appear in court since Oct. 5, 2017, when the case first came up.

Okocha, who was not in court, was not represented by any lawyer either and the judge renewed the warrant for his arrest for the third time.

Akintoye, who had earlier issued arrest of warrant to Okocha on Jan. 29, adjourned the case until Oct. 10 for further directions.

Earlier, the prosecutor had filed a three-count charge against Okocha on June 6, 2017, accusing him of failure to furnish LIRS return of income for tax purposes, and failure to pay income tax.

He said the offences contravened Section 56(a) and (b) of the Lagos State Revenue Administration Law No. 8 of 2006.