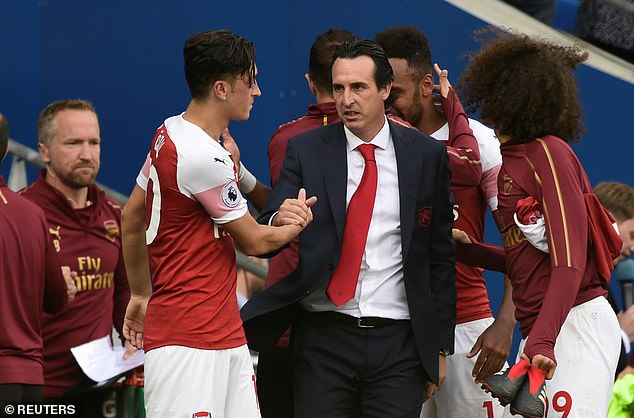 Arsenal boss Unai Emery did little – or even nothing – to quell misgiving that he might be ready to sell midfielder Mesut Ozil, repeatedly refusing to say on Wednesday that he wants to hold on to the player.

Ozil, who joined the Gunners from Real Madrid in 2013 for a then-record £42 million, has been left out of the side regularly in this last two months, at first due to a back sprain and then – according to Emery – because of the physicality of some opponents.

The German playmaker, whose contract at Arsenal continues until 2021, was also not on the team-sheet for the 2-0 loss to Tottenham Hotspur in the League Cup quarter-finals at the Emirates on Wednesday.

“It’s a tactical decision because I thought that the players that were with us today were the best choices for this match,” Emery told reporters when asked about Ozil’s absence.

Asked whether he would consider offers from other clubs for Ozil in the January transfer window, Emery was cagey.

“My focus now is the analysis of this (Wednesday’s) match, and also Saturday against Burnley,” he said, referring to Arsenal’s next league fixture.

When asked directly if Ozil has a future at the club, he repeated: “I am thinking about the match on Saturday, and not thinking about another situation.”

Emery also played down the hint that Ozil, for years the most expensive player on Arsenal’s payroll and believed to be earning around £350 000 a week, was a star player.

“Every player is important,” Emery said.

The rumour over the 30-year-old’s future comes as the club get ready to lose the services of long-time midfielder Aaron Ramsey, whose contract extension talks with Arsenal broke down in September.