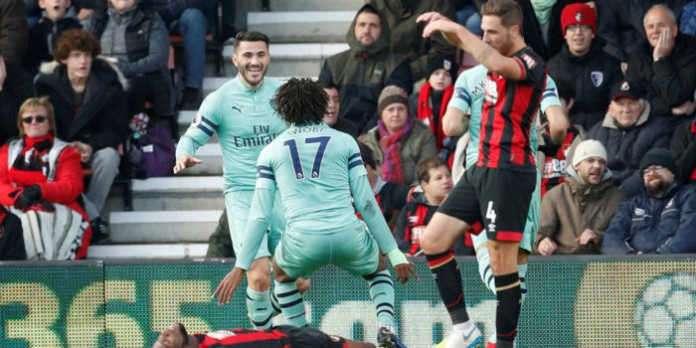 Arsenal didn’t find it easy at all in the first half of the match against Bournemouth. It seemed their winning streak was going to be jinxed by the looming draw.

Arsenal fans were brokenhearted when they conceded a goal to Bournemouth in the 45th minute and someone had to be blamed. Although they won the match, here is what fans think of Alex Iwobi:

Iwobi caused us this goal. Instead of him to shoot that’s when he decided to do atilogwu dance in the box. Twat

I think Iwobi would be a better player if he plays more like himself than trying to show that he is Okocha's nephew.

The hate Mkhi and Iwobi getting . This “I have to blame someone” culture has to end .

Why is Iwobi, who lost the ball *inside the Bournemouth box* trying to fashion space for a shot in a tight penalty area, being blamed for that Bournemouth equalizer? The Cherries ran the entire length of the pitch to score!

Blame Iwobi for that equaliser,what the hell was he overdribbling for?

You hailing Iwobi one minute berating him the next pic.twitter.com/rmUwQS7Fua

Arsenal first half Vs Arsenal second half pic.twitter.com/QZBC9it2Ih