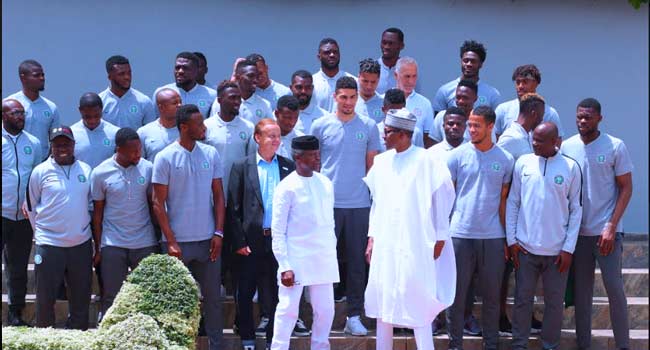 The Federal Government of Nigeria have reportedly refused to host the Super Eagles, who won Bronze at the just concluded Africa Cup Of Nations in Egypt.

The Nigeria national team were seen checking out of the Hilton Hotel in Abuja as they learnt the Buhari-led government is not disposed to hosting a third-placed finish.

This will be the eighth time in the history of Nigeria that the Super Eagles will be winning the AFCON Bronze.

The team, which was led by assistant captain Ahmed Musa, was received by the Secretary to the Federal Government Boss Mustapha on arrival from Cairo.

“Considering the level that Nigeria has attained in the AFCON, you don’t expect that we will be celebrating or hosting the Super Eagles over a third-place finish when just six years ago we won the AFCON in South Africa,” a top official told GoalBall.

“There’s no way that is going to happen. It’s like going backwards!”

Many Super Eagles supporters had hoped that the Gernot Rohr led team will go all the way to win a fourth AFCON crown in Egypt.

Nigeria was eliminated at the tournament’s semifinals, losing 2-1 to eventual champions Algeria.