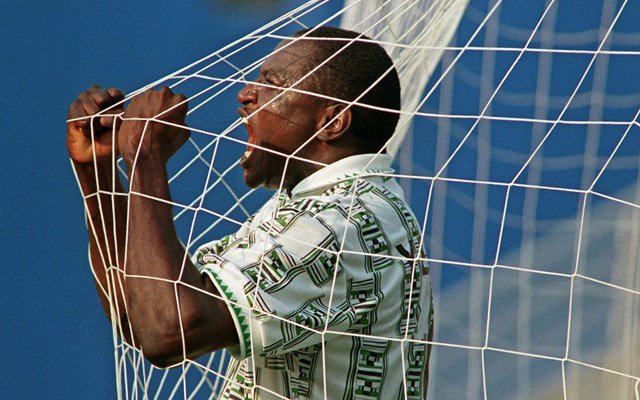 A photo of the late Yekini, celebrating a goal was shared on FIFA World Cup Twitter handle @FIFAWorldCup.

The tweet read, “Rashidi Yekini, scorer of Nigeria’s SuperEagles’s first goal at the #WorldCup, would have been 55 today.

“The celebration from Nigeria’s record goal-scorer will live on in World Cup folklore.”

??Rashidi Yekini, scorer of @NGSuperEagles‘s first goal at the #WorldCup, would have been 55 today.

The celebration from Nigeria's record goal-scorer will live on in World Cup folklore. pic.twitter.com/Kfv0waQJLG

Yekini scored 37 goals as a Nigerian international, and represented the nation in five major tournaments, including one World Cup in USA ‘94 where he scored the country’s first-ever goal in the competition. He was also named the African Footballer of the Year in 1993.

Posthumous Birthday shout-out to our legend, ‘Yeking of goals,' Late Rashidi Yekini. Power, pace and precision best describe Yekini on the pitch. The big man would have been 55 today. He remains the all-time top scorer of the @NGSuperEagles with 37 goals. Rest on legend!?? pic.twitter.com/J0PTjZCIZO