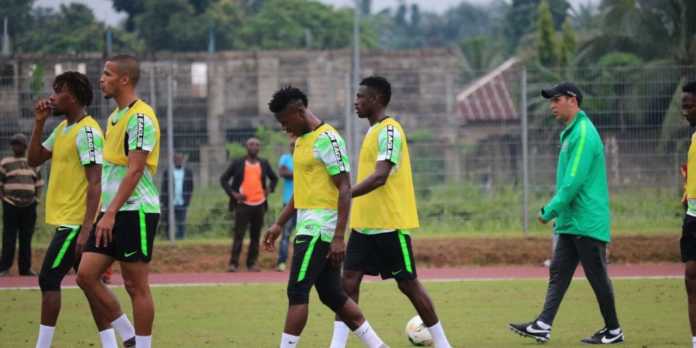 Gernot Rohr has named his team that will take on Uganda in an international friendly today, which is scheduled to kickoff at 16:30 hours.

Rohr made six changes to the side that started Saturday's 1-1 draw against South Africa in an Africa Cup of Nations qualifier.

Chippa United goalkeeper Daniel Akpeyi will start in goal and this means that Enyimba's Theophilus Afelokhai will replace him at half-time.

John Ogu will lineup alongside Semi Ajayi in central defense, while Jamilu Collins and Brian Idowu will dwell in the fullback positions.

The Lokomotiv Moscow defender is making his home debut after remaining an unused substitute in a friendly against the Democratic Republic of Congo back in May and was not in the 18 vs Libya last month.

Mikel Agu and Oghenekaro Etebo will be deployed as the two holding midfielders.

Alex Iwobi will start as the playmaker while Samuel Chukwueze and Ahmed Musa will play from the right and left wing respectively.

Wolfsburg loanee Victor Osimhen is expected to lead the charge for goals in a 4-2-3-1 formation.