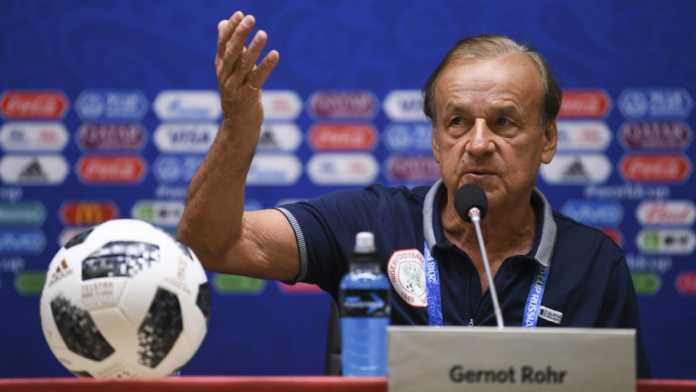 Super Eagles coach Gernot Rohr has finally added his voice to the two goals disallowed by Gambian referee Bakary Gassama to rule out two legitimate goals scored by the Super Eagles in their 1-1 draw with South Africa in an Africa Cup of Nations held at the FNB Stadium on Saturday afternoon.

Nigeria had the ball in the net in the 8th minute but the effort was not allowed with the linesman adjudging Ahmed Musa to have been in an offside position during the build-up.

Replays evidently showed that the decision by the match officials was wide of the mark as the Super Eagles captain was onside when he was put through on goal.

The second episode also involved Musa, it looked as if the former Leicester City man had put Nigeria 2-1 up after a delightful pass from Iwobi but the flag went up again.

”The goal by my captain was not offside. Two goals for us were not given, but I don’t criticise the referee,” Rohr told Scorenigeria.com.ng.

”We got the result we needed.”

Meanwhile, the Super Eagles players and officials have landed in Asaba on Sunday morning ahead of Tuesday's international friendly against Uganda at the Stephen Keshi Stadium.