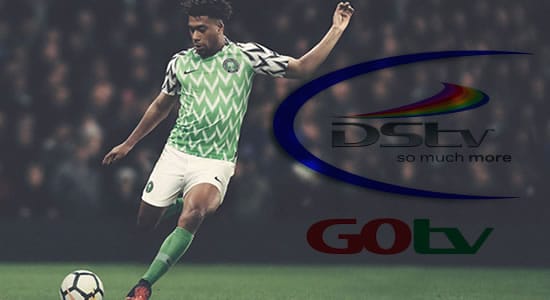 GOtv has confirmed that Tuesday's international friendly match between the Super Eagles and Pharaohs of Egypt will be broadcast live.

The friendlie game, scheduled for the Stephen Keshi Stadium, Asaba, will be aired live on GOtv SuperSport Select 1 at 4pm.

The game between the two teams will serve as a warm-up match for the two African football giants ahead of the 2019 Africa Cup of Nations, which will be hosted by Egypt in June.

Both teams have met 17 times, with the Eagles winning on seven occasions, while the Pharaohs have won five times, the most recent being a 1-0 victory in March 2016, which denied Nigeria a ticket to the 2017 AFCON.

The Eagles go into the freindlie on the back of a 3-1 win against Seychelles in their last 2019 AFCON qualifier at the same Stephen Keshi Stadium.