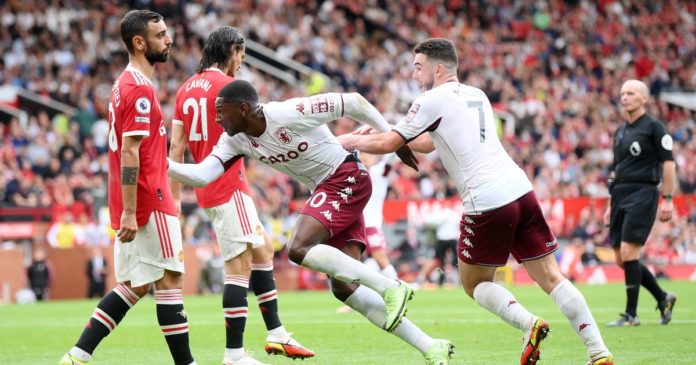 Manchester United were served a taste of what West Ham experienced last Sunday at the London Stadium as Bruno Fernandes blasted over the bar a late penalty that should've salvaged a draw for United against Aston Villa.

An 88th-minute header from Kortney Hause helped the Villa Park side snatch a victory at Old Trafford for the first time since 2009.

Unlike Manchester United, Villa were not starstruck but had several early chances of their own. In the 16th minute, Matt Targett latched onto a deft pass from Matty Cash inside the box, but could only send a nervy shot over the bar.

With four goals in three competitive games for United, all eyes were on Ronaldo, with the man himself having scored more Premier League goals against Villa than any other team during his first stint at Old Trafford. He nearly added to that tally in the tenth minute, after embarking on a solo effort from countryman Bruno Fernandes pass and nutmegging an opponent, only to fire wide from 30 yards.

Shortly before the interval, Emiliano Martinez played a part in making sure that nothing changed, blocking a trademark Harry Maguire header almost on the stroke of HT.

Considering United's last tie during the week against West Ham, the Red Devils were expected to come on in the second period and fire from all cylinders.

That was not the case though, and after seeing a penalty appeal waved away just before the hour mark, Watkins had the first clear-cut chance of the second half, weaving through the defence and firing a shot towards the left-hand corner. De Gea reacted instinctively with an exquisite save, and United were off the hook once more.

Dean Smith's side were rewarded with the opener in the 88th minute, which came via a corner, whipped in expertly by Douglas Luiz and headed into the corner by Hause.

However, the drama didn't stop there with United being given a penalty in injury time through a Hause handball – similar to Shaw's penalty incident last Sunday.

Bruno Fernandes lost his composure though, sending the spot-kick sailing over the bar meaning Aston Villa have now moved up to the seventh place on the log while United drops fourth.