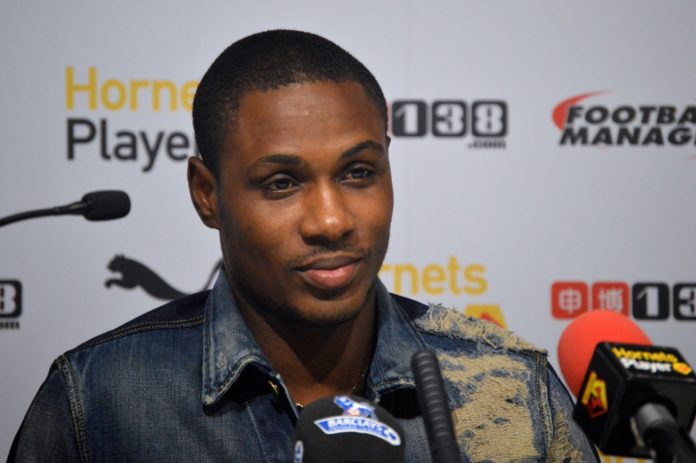 Odion Jude Ighalo recently admitted that he almost quit the Super Eagles after his family was threatened with death following his not too impressive performance at the last Russia 2018 World Cup.

But today, the 29-year-old who banged in a hat-trick against Libya in Uyo last Saturday and followed up with a brace on Tuesday night in a reverse fixture in Sfax, Tunisia is now the toast of Nigerian football fans.

“I felt very bad (when they threatened my family). I had to talk to my wife because she could not take it.

The Changchun Yatai forward in the Chinese Super League stressed that his wife never wanted him to return to Eagles after he missed some clear chances against Argentina in a crucial game in St Petersburg Stadium (Russia) that would have earned Nigeria passage into the second round of the World Cup, if only Ighalo had converted those chances.

But some disgruntled Nigerian football freaks who could not stomach Ighalo’s misses against the Albeceleste took to the social media to pour invectives on him and his family. Some of them even went overboard, threatening his wife and kids.

“My wife said ‘you don’t have to go there (to Nigeria) anymore’ and it was because of all what they said to her and to our family,” the Eagles forward recalled.

However, all that is now in the past. The former Watford front-man has redeemed himself with the five-goal feast against Libya. “I know the fans want me to score goals. I understand them. But some of them took it to another level.”

Nigeria who had only three points from the victory over Seychelles bagged six maximum points in the two-legged fixtures against the Mediterranean Knights within a space of five days. That feat leapfrogged the Super Eagles from third to first in Group E of the AFCON 2019 standing on nine points. Bafana Bafana is second on eight points while Libya is third on four points. Seychelles has just a point to show from the draw against South Africa on Tuesday.

Gernot Rohr in his post-match review of the Battle of Sfax said yesterday that the Eagles need just one point from the remaining two matches for a safe passage to the AFCON 2019 to be hosted by defending champions Cameroon.

“A point from these games will be enough to qualify us. We are not at the AFCON yet, but our chances are very good,” stressed the Technical Adviser of the Super Eagles who also admitted his young team panicked Tuesday night after Libya pulled a goal back in Sfax, Tunisia.