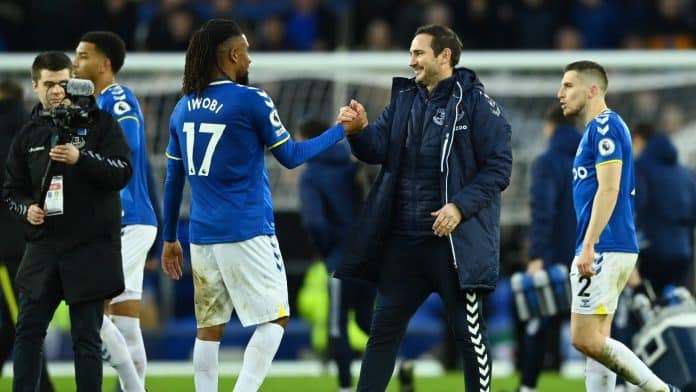 Everton boss Frank Lampard believes that Super Eagles midfielder Alex Iwobi has to improve on his activity in opponents’ final third if he wants to get better in his role.

Iwobi has simply picked up from where he left off last season. After playing a crucial role in Everton’s Premier League survival fight last season, the former Arsenal man has been the best man for the Merseysiders this season.

Unlike last season when Iwobi played at fullback, this season Lampard has given the 26-year-old a new midfield role and Iwobi has adapted to his new position without looking unfazed.

The Nigerian midfielder has provided the assists for three of Everton’s seven Premier League goals this season, and his work rate has been outstanding.

However, with all of his brilliance, Iwobi is yet to score in the English top-flight after eight appearances.

Ahead of Manchester United’s visit to Goodison Park, Lampard is full of praise for the former Arsenal man, but he believes the Nigerian can still add a few things to make his game better.

“Since I’ve been here he hasn’t changed. He has been a fantastic player for me in whatever position I played him in last year,” Lampard said as per Blue Mersey.

“In the summer I gave pause for thought and how we construct the team as you move forward, and I wanted to move Alex into a more central position regularly — to finish the season he was a wingback at times — because I just felt it would really suit his attributes.

“Then it’s down to him. Of course, having a good team structure really helps any player, but it’s been down to him. I’m just delighted he’s getting the recognition he deserves as being one of the top midfield players in the Premier League at the moment. That’s how I feel about him.”

“Can he add more to his game? Yes. In and around the final third he can do more because his talent says so. In-game he can do more, he can assist more, maybe score himself a bit more, but I’m not complaining there, he’s been fantastic for us,” Lampard added.

After consecutive victories against West Ham and Southampton, Lampard would hope that his lads come to the part when they take on the Red Devils at Goodison Park.