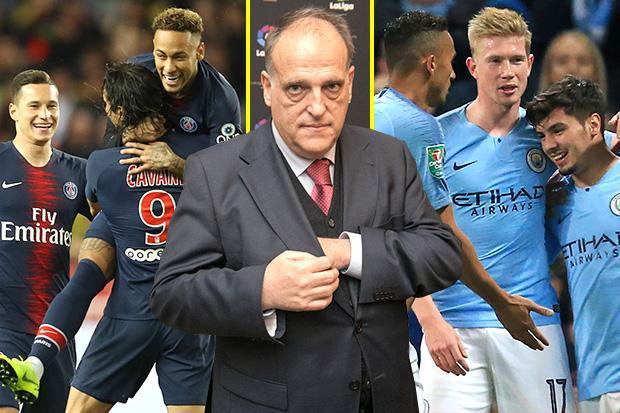 LaLiga president Javier Tebas has accused Paris Saint-Germain and Manchester City of “Cheating” and asked that the Ligue 1 giants be banned from the Champions League.

PSG and City both found their financial practices under the microscope earlier this month following a series of articles by Der Spiegel and MediaPart, drawing on documents purportedly obtained by whistleblowers Football Leaks that claimed each club had broken rules by attempting to outwit UEFA's Financial Fair Play laws.

Premier League champions City declined to comment on the allegations, adding that “The attempt to damage the club's reputation is organised and clear”.

“It's very important that UEFA does something real about it. It's something that has unbalanced world football and the structure of the game. You have to punish those teams.”

City and PSG reached settlements with the UEFA Club Financial Control Body in May 2014 after they breached FFP regulations.

“Our goal at UEFA was always to keep the clubs with us, not to kick them out, so you negotiate and seek solutions. That was my job as the general secretary,” FIFA President, Infantino told Swiss publication Blick.

Speaking two weeks ago amid Der Spiegel's series of articles, City manager Pep Guardiola told reporters he expected his club to be punished if they were found to have violated UEFA rules.