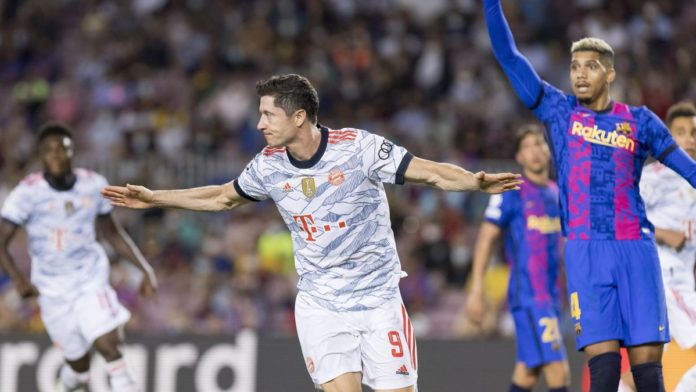 Robert Lewandowski's brace at the Camp Nou helped Bayern Munich open their 2021/22 UEFA Champions League campaign with a remarkable polished win against a hapless Barcelona side.

The Bavarians went into the tie fresh off a marauding 4-1 at the Red Bull Arena over the weekend. The confidence continued to flow at Camp Nou and it took the German champions thirty-four minutes to notch the first goal.

Thomas Müller took aim from 18 yards following a wonderful one-touch team move, with the ball landing in the back of the net via a deflection off Eric Garcia.

The visitors looked even more comfortable at the back and dangerous upfront even the break before Robert Lewandowski doubled their lead.

Barcelona, in their lackluster spirit all through the night, had no answer for their play in and around the box, before Musiala's shot rebounded off the post where Lewandowski was waiting to pounce four minutes before the hour mark.

Lewandowski added a third in the closing stages, this time capitalising on a Serge Gnabry effort that struck the woodwork before emphatically finishing Barca off.

Incredibly, Lewandowski has now scored in 18 consecutive Bayern matches – scoring a total of 29 in that time.

Albeit the Blaugrana offered very few threats in a spiritless performance, but they will still be confident of progressing from the group that houses Dynamo Kyiv and Benfica.