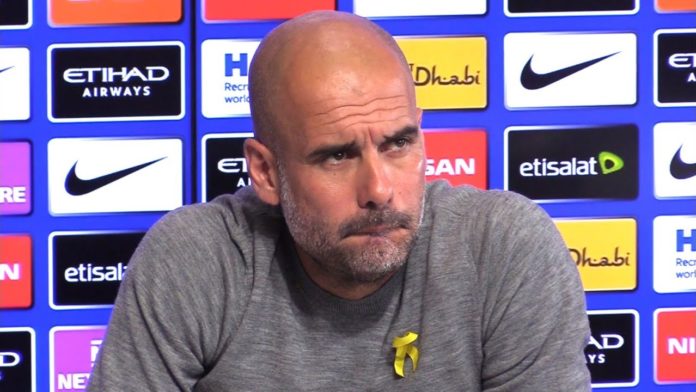 Manchester City manager Pep Guardiola talks about the latest casualties as the Blues gear up for the visit of West Ham United tomorrow night.

Fernandinho and Aymeric Laporte are likely to be back by the end of March after their Wembley injury scare.

With Gabriel Jesus and John Stones anticipated to be back shortly after missing the Carabao Cup final, Pep Guardiola is a relieved man.

He wasn’t able to give precise details about return dates but said that the FA Cup showdown at Swansea on March 16 was a possible return date.

“We were without Gabriel and John Stones, and they are still out, and now we are without Fernandinho and Aymeric as well,” said Guardiola at today's press conference ahead of the league clash with West Ham.

“For the next weeks they will be out but after the international break, maybe … but Gabriel and John are coming back soon.

“I am sure Fernandinho cannot play against Schalke in the Champions League as he is suspended so he will take a rest and look after the international break.”

Mendy has trained in the last three or four days and is expected to feature in the West Ham game.

In the Carabao Cup final at Wembley, Fernandinho limped off towards the end of normal time, holding his groin – and Guardiola's initial reaction after the match was that he would be out for “Some weeks”.

It was the same initial prognosis for Laporte, who was substituted at half time after tweaking his hamstring while tussling for the ball with Eden Hazard.

The City boss now has to work out his best option to replace Fernandinho in the heart of the City midfield.

He brought in fellow Brazilian Danilo to perform the role on Sunday – and he helped keep the scoreline blank before Man City took the trophy in a penalty shoot-out.

Ilkay Gundogan, Fabian Delph and Benjamin Mendy all trained this morning an should be available for the Hammers’ game.