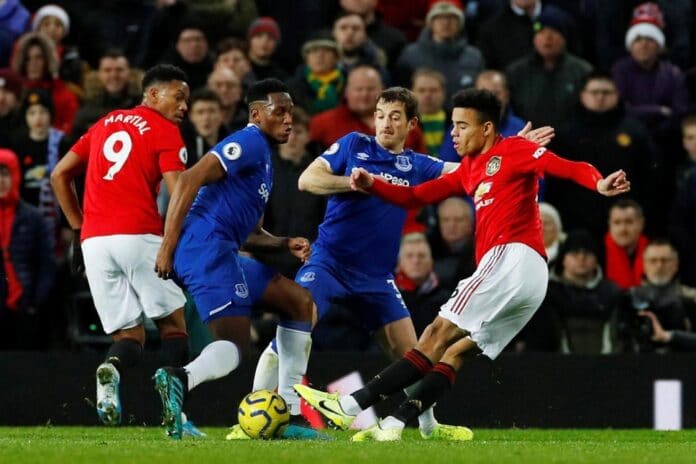 Manchester United played out a 1-1 draw with visiting Everton side at home despite taking the lead in the first half. But Rafael Benitez and his men drew level after the hour mark thus piling further pressure on manager Ole Gunnar Solskjaer.

It was a game the Red Devils would have used to assure their fans of good things to come for their beloved team but it wasn't to be as a draw was the case after 90 minutes of football.

The French man has proved that he's capable of competing in United's attacking set-up. And with the arrival of Cristiano Ronaldo and the availability of Uruguayan star Edinson Cavani in the United team squad, playing time was expected to be a challenging factor for the French forward (talent) Anthony Martial.

But playing alongside Edinson Cavani and youngster Mason Greenwood, he gave his United side the much-desired breakthrough in the match.

It was an excellent goal from a player who's not played much on the Redshirt.

And it's a big reminder of what he can do to manager Ole Gunnar Solskjaer when he's given more games to play as he finished brilliantly to confirm his relevance to the Red Devils side along in the season.

Manchester United was hard done by manager Rafael Benitez as Everton stole a 1-1 draw away at Old Trafford.

Coming into the match expectations were high especially when it pertains to the Red Devils side following their not too good display in recent games.

And it was Old Foe Benitez that ensured that more worry would trail Manchester United's camp in the days ahead following the 1-1 draw in the contest.

Andros Townsend did the needful as he gave Rafael Benitez's Everton side the goal they wanted thus haunting United's season with another dismal result at the Theatre of Dreams.

OPPORTUNITY LOST FOR SOLSKJAER AND UNITED

Dropping two points against Everton was not the actual result Manchester United wanted when they played host to the Toffees in the Premier League.

With Liverpool set to face Manchester City in the title driven clash on Sunday, it was expected that United would take advantage of the somehow depleted Everton side here at least with a win at home.

But it wasn't to be as they dropped valuable two points at home, leaving Chelsea and Liverpool or Manchester City with the leverage to gain ascendancy over them in the title race this weekend in the Premier League.