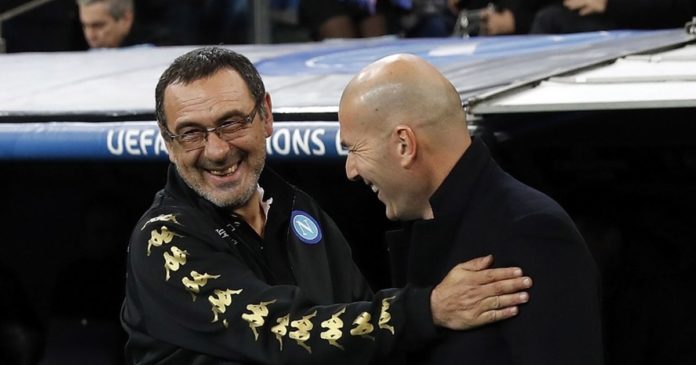 Chelsea have indicated interest in hiring Zinedine Zidane as Maurizio Sarri's successor should they decide to sack the under-pressure boss, according to reports.

The Sun reports that talks among Chelsea's top brass have led to Zidane becoming the No 1 candidate to take charge.

The Blues are drawn to the fact Zidane boasts three Champions League triumphs in three years during his time with Real Madrid as manager.

Any attempt to land Zidane now may prove difficult with the Frenchman currently on a sabbatical.

Zidane is thought to be keen on taking a job in the Premier League but does not entertain the idea of joining a team half way through the season.

Along with Tottenham's Mauricio Pochettino, Zidane is highly regarded among Manchester United chiefs and the club are yet to rule out a move for the former Galactico.

United's decision to appoint an interim boss after Jose Mourinho's sacking before Christmas could have been down to their plans to make a move for the likes of Zidane or Pochettino come May.

But with Chelsea also apparently interested in his services to take them back to the top of European football, both clubs now look set to battle it out for his signature.

Zidane will certainly not be short of offers when he decides to return to the dugout.