Ole Gunnar Solskjaer is doing all the right things to convince the Manchester United hierarchy to give him the role full time.

After being installed to fill the void left by the sacking of Jose Mourinho in a caretaker capacity, Solskjaer has won four Premier League games as well as securing safe passage to the fourth round of the FA Cup.

However, the need to catch up with fierce rivals Manchester City and Liverpool is a priority and the gulf in class between the club cannot be allowed to widen.

Regardless of who their manager is next season, if the club can pull off even one or two of the signings they have been linked with, then murmurs of the Premier League returning after seven years will surely begin to become reality.

Easily one of the best shot-stoppers in the world, the Spaniard will be looking to improve his haul or move onto pastures new in the summer.

If Solskjaer is in charge, then giving the captain’s armband on a full-time basis may well be the answer to keeping David de Gea.

This has been a longtime problem area for the Red Devils.

Roma defender Kostas Manolas has a £32million release clause which United are reportedly ready to trigger and a move for Kalidou Koulibaly could well be completed this month.

Luke Shaw and Diogo Dalot are young, attack-minded and capable of nailing down the full-back roles for many years at Old Trafford.

For the past four La Liga games, Coutinho has strangely sat on Barca bench and the odds on a move to old Trafford have tumbled.

With the ‘all-new' Paul Pogba, United could keep the ball for fun in the middle of the park before flicking a switch and slicing teams wide open.

Once a scapegoat for everything wrong under Mourinho, Ander Herrera’s return to form means a new contract may well be on the table for the combative Spaniard.

Croatia and Inter superstar Ivan Perisic may well finally be on his way to Old Trafford. As per sacking of Jose Mourinho, the Serie A giants are geared up to cash in on the winger to fund a move for Luka Modric.

As mentioned before, Anthony Martial and Marcus Rashford look like new signings under Solskjaer.

The best thing about starting them both in a 4-3-3 formation is both forwards are comfortable enough to swap and drift into inside left or central positions.

Alongside the equally versatile and dangerous Perisic, nothing stops United from having one of the most potent attacking lineups in the Premier League next season. 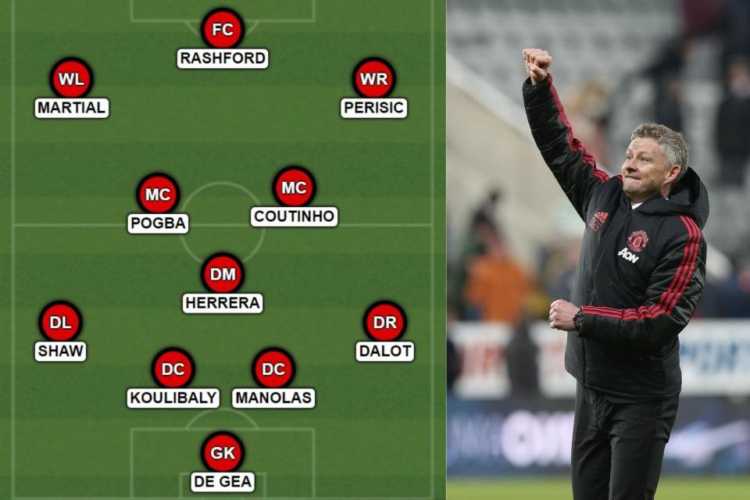