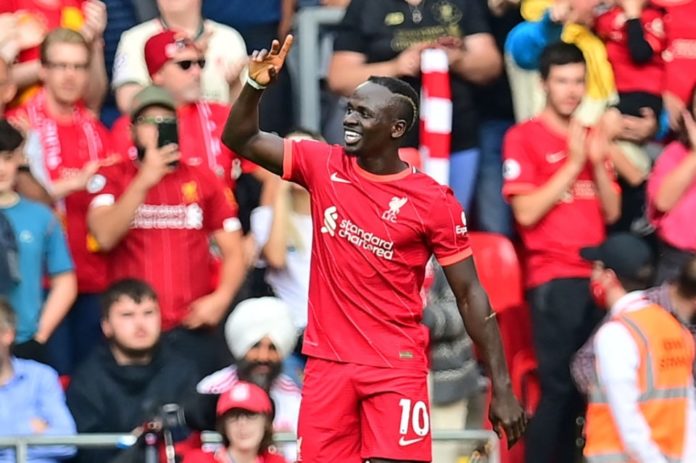 Sadio Mané was phenomenal in Liverpool's 3-0 win against Crystal Palace at Anfield on Saturday afternoon, becoming the first player to score in nine consecutive premier league matches against one opponent.

The win was Liverpool's third win on the bounce in all competitions after their 1-1 draw with European Champions, Chelsea at Anfield some weeks back.

Crystal Palace were coming on the back of a remarkable 3-0 defeat to Spurs last weekend in a London Derby but Patrick Vieira's men were the second-best all through the entirety of play in their first League match this season outside London.

With just three minutes played, the ‘Eagles' had their first chance of the encounter when Wilfried Zaha lifted the ball over Alisson Becker who was caught out of position, but the Brazilian recovered brilliantly to claw the ball onto the post.

Diogo Jota missed a gilt-edged opportunity. blazing over from just inside the six-yard box, but Mané ensured the hosts went into HT with a much-needed lead.

The Senegalese international reacted quickest to Guaita's parry and calmly dispatched the ball into the net from close range to become a Liverpool centenarian goal scorer.

In the second forty-five, Liverpool looked for their second goal, and Guaita was forced into action once again, making an important double save, first denying Mane and then Salah's close-range effort.

Liverpool did make it 2-0 when the ball fell to Salah from a corner, the Egyptian powerfully volleying the ball into the net. Keïta wrapped up the superb win, with a thunderous volley to make it three.

Courtesy of the impressive victory, Liverpool go top of the Premier League and are on a fifteen matches unbeaten spree – the longest current unbeaten run in the top four divisions in England.

Meanwhile, Crystal Palace will now turn their attention to what promises to be a hostile encounter against rivals Brighton & Hove Albion next time out.