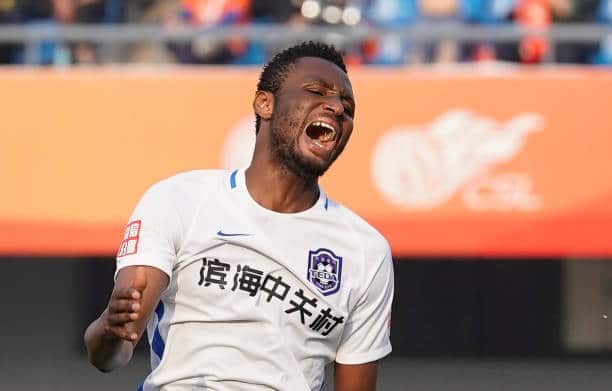 The Tianjin TEDA captain who is yet to feature for  Nigeria after they failed to advance from the group stages of the 2018 FIFA World Cup in Russia, suffered a muscle injury in training.

Mikel was not available for Tianjin Teda’s Tuesday’s training owing to the injury.

Mikel will, however, miss Tianjin TEDA’s home game against Dalian Aerbin on Wednesday and Sunday’s final match of the season away at Guangzhou Evergrande.

“We are in a difficult situation right now. We know the importance of the remaining matches,” Mikel told the Nigerian Football Federation’s Assistant Director of Communication, Ayo Olu Ibidapo.

“I’m solidly behind the team and I believe the guys will do the job on the pitch and ensure we remain in the top flight,”

Tianjin TEDA are at present 15th in the 16-team CSL table with 29 points from 28 points, level on points with Chongqing who now occupy the 14th position on the table.

Tianjin TEDA must win their remaining two matches to stand a good chance of avoiding relegation at the end of the season.