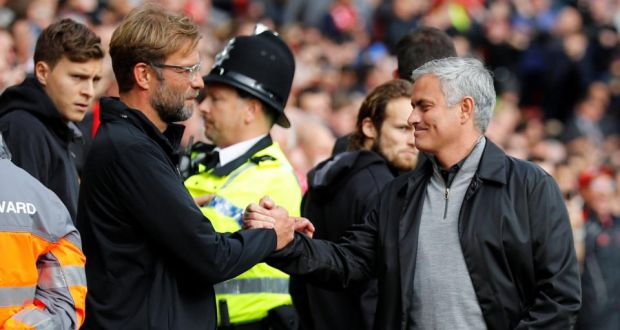 Liverpool boss Jurgen Klopp has been advised by former Manchester United Jose Mourinho to be ‘honest' with his players if they are to pip Man City to the Premier League title.

The former Chelsea manager believes Klopp should deliver it straight to his under-performing squad, who have drawn five of their last seven games in all competitions.

Their latest 0-0 draw with Everton saw them slip off their perch at the top of the Premier League, with Pep Guardiola's defending champions taking a slender one-point lead.

Mourinho believes the title race is still wide ‘open' and offered some advice to the German on how to handle this challenging situation.

“It's never easy and of course the personality of the manager is very important,” he told BeIN Sports.

“Jurgen, I don't know him personally well enough like I do some other managers, but it looks from the outside that he's a positive person – a happy guy that has some contacts with the players, he's very tactile.

“I think he's going to make them believe what we also believe: that's it's open.

“He's trying to prepare them and I think the best way to prepare sometimes is to be really honest.

“It's not to try sometimes to sell dreams.

“To be honest is to say we're not in our best moment.

“By being honest maybe they can think about, I don't say they're bad qualities, but the little things that aren't going so well and try to focus on that and go for it.

Mourinho calls for Klopp to be honest with his players!#beINPL #beINMourinho

Mourinho is intrigued by how the season will pan out and thinks this particular Premier League season is ‘very interesting'.

“Man City has to play against rival Manchester United at Old Trafford,” he added.

“Bournemouth was the proof that an opponent who is mid-table and is without any kind of pressure to be relegated can be a difficult opponent.

“In the English football world there is this pride of nobody gives a point to anybody.

“You have to earn it, that's the mentality of English football.

“The championship is very interesting.”