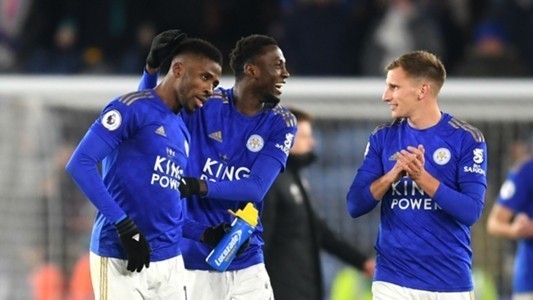 Leicester City bounced back from Sunday's defeat at Southampton to beat West Ham United 4-1 at the King Power Stadium.

Brendan Rogers’ side took the lead in the 14th minute when Ricardo Pereira was played into the box and his cross-shot was tapped home by the in-form Harvey Barnes.

Leicester suffered a major blow shortly before half-time when Jamie Vardy, the Premier League's top scorer, pulled a muscle when hooking the ball clear inside his own area.

The 33-year-old attempted to carry on after treatment but was replaced by Kelechi Iheanacho.

But the Foxes still managed to go in at the break two goals to the good, as Barnes turned provider for Ricardo to score five minutes into stoppage time.

The Hammers, who had offered next to nothing in the first half, got back into it five minutes after the restart when substitute Wilfred Ndidi, who has come on for the injured Nampalys Mendy in the 34th minute, brought down Sebastien Haller in the box.

Mark Noble made no mistake from the penalty spot.

The visitors pushed for an equaliser but couldn't find the crucial second goal, and Leicester made the points safe with a penalty of their own nine minutes from time when Angelo Ogbonna tripped Iheanacho.

With Vardy off the pitch, it was Ayoze Perez who stepped up to power his spot-kick past Darren Randolph.

Leicester put some gloss on the scoreline in the 88th minute when Iheanacho laid the ball off for Perez, who turned expertly to fire into the bottom corner.