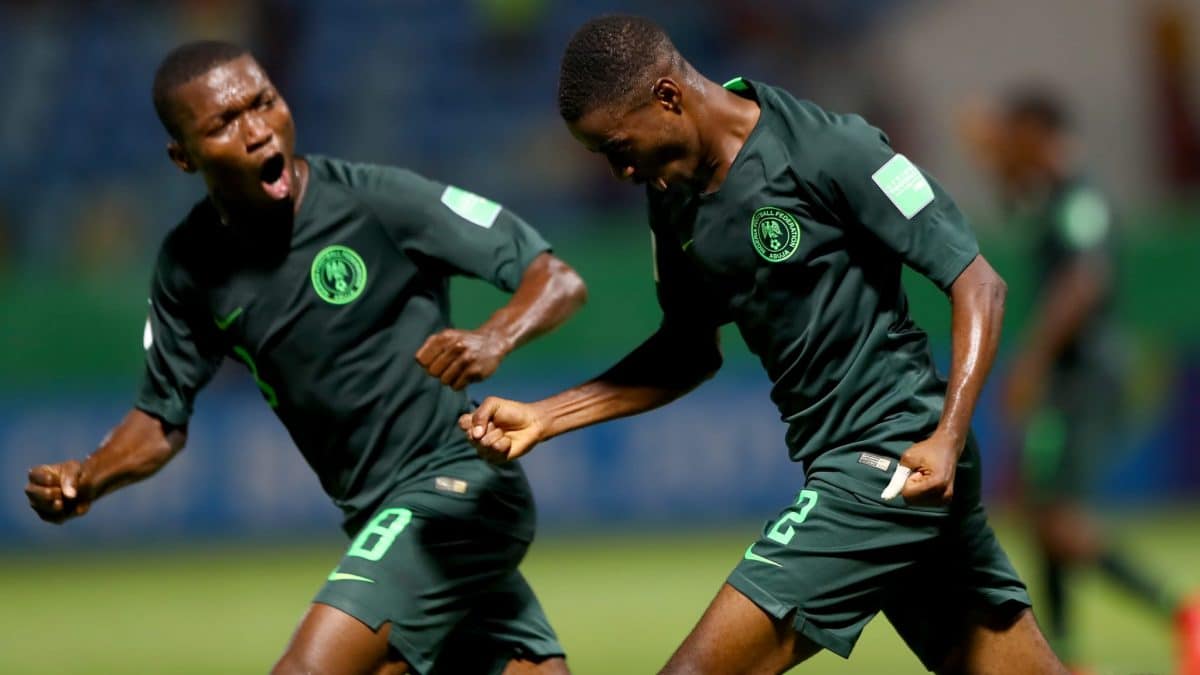 The Golden Eaglets on Saturday night came from behind to defeat Hungary 4-2 in their Group B opening match at the 2019 Fifa U17 World Cup.

Samson Tijani’s brace and lone efforts from Usman Ibrahim and Oluwatimilehin Adeniyi secured maximum points for the African country at Estadio Olimpico in Goiania after the Hungarians had led through an early goal from Gyorgy Komaromi and again through Samuel Major.

Akinkunmi Amoo from Nigeria is a superb talent. Quick, good technique, strong, low CG, would cause a lot of problems.

Fans took to Twitter to applaud the Sidos Academy wonderkid, AKA ‘Little Messi.’

Tweeted this when Amoo came on and Eaglets scored three after. https://t.co/YTivHgvf9s

My bad. His name is Akinkunmi Adebayo Amoo* No. 13

That Amoo is a joy to watch. Full of energy and a lot of skills.

@aremulateef1 na your area boy be Akinkunmi Amoo? He is the match of the match against Hungary.

This is one set of Nigerian Golden eaglets that looked genuinely like their real age.
That Amoo is a . Only injury can derail him. His pace, vision and exquisite dribbling skill stands out form me. #FIFAU17WC #NGAHUN pic.twitter.com/0nenP0mYUv

Good morning and welcome to the world of Akinkunmi Amoo #SoarGoldenEagletspic.twitter.com/sf6fCIaB3Z

Eaglet of the match – Samson Tijani. Marshalled the midfield. Sat deep and kept our play out of the back tidy.
The X-Factor- Akinkunmi Amoo. Lad will become huge if he keeps this up. In all, fine performances all round. Garba should make tactical adjustments in defence.

They have one…. His name is Akinkunmi Amoo… The no.13

Beautiful second half from the Golden Eaglets and masterclass performance from Akinkunmi Amoo. Go Eaglets  #FIFAU17WC

Watch out for Akinkunmi Amoo in the Golden Eaglets team. Very talented lefty, I can assure you of that. He's our boy

Olakunle Olusegun was MOTM
• Amoo changed the game
• Tijani can work on his long balls and long range strikes
• The two full backs were immense in the second half
• Ibrahim Said looks solid
• How is Manu Garba not coaching the Super Eagles?

@Monsurah1412 The lads really did us proud but jersey #13 Amoo is a big deal.

Dude change the game with his cute skill, vision and pass accuracy.

As much as I love to praise the Eaglets tonight, I won't but mention some lapses I noticed during the course of this match. We possess the ball too much, too much aimless shots off target. Amoo changed the face of the game despite playing as a substitute and as a winger.