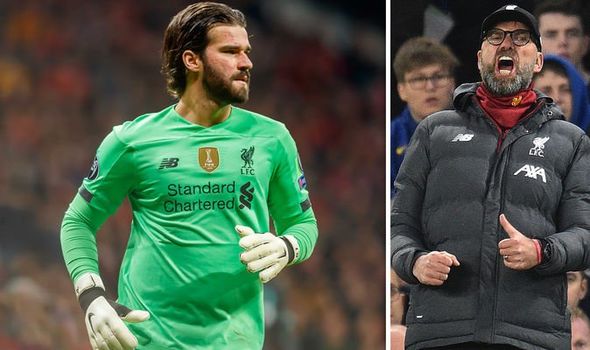 Liverpool had initially feared goalkeeper Alisson Becker would be out of action until late November upon original assessment.

Jurgen Klopp has had a torrid time with injuries in the past few weeks, which includes Virgil van Dijk, who is set to undergo surgery on his anterior cruciate ligament after a high tackle from Jordan Pickford in last week's Merseyside derby.

Thiago Alcantara was also injured in the clash alongside Joel Matip.

But things are now looking up for Klopp and according to the Liverpool Echo, Alisson is in line to return next weekend against West Ham.

Speaking ahead of the trip to Amsterdam, Klopp revealed the former Roma shot-stopper was feeling good about his fitness.

“Ali looks very good. We have to see; catching balls and stuff like this is all possible. But we cannot rush it and will not rush it,” he said.

While Adrian kept a clean sheet against Ajax, his performance was far from convincing.

Meanwhile, Adrian will be in goal for the next two matches as the Reds host Sheffield United and Midtjylland at Anfield before the visit of the Hammers.