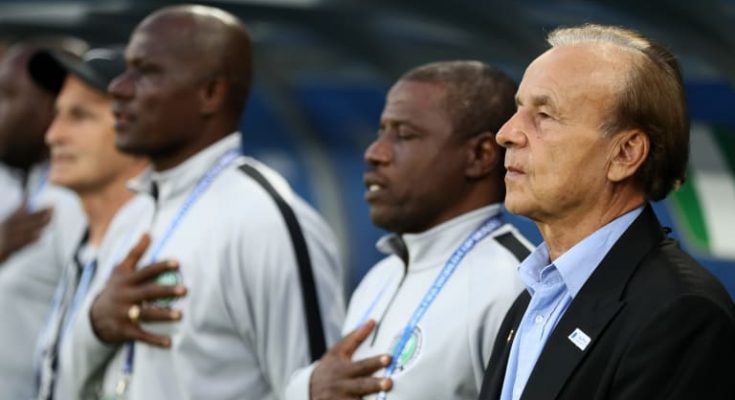 The Nigeria Football Federation (NFF) President, Amaju Pinnick debunked the rumours that the Super Eagles Coach, Gernot Rohr will be sacked and said, on the contrary, he will be proceeding for a refresher coaching programme with Bayern Munich, after the Africa Cup of Nations disappointment in Egypt.

Pinnick said Rohr has met the minimum expectation of the football governing body.

The Super Eagles’ hopes of a fourth African title faded into thin air following a 2-1 defeat to Algeria in the semi-final.

However, in a series of tweets, Pinnick informed journalist Osasu Obayiuwana on the position of the NFF.

“Gernot Rohr will not be sacked as Super Eagles coach. He will remain in the job. I have complete confidence in him,” Pinnick revealed.

“Gernot has taken us to the semi-final, the target we set for him. Right now, we have a third-place match to play for and we intend to have our team leave Egypt with honours.

“There are some people that have been calling on me and the federation to sack Gernot. But I am not going to do that.

“In fact, Gernot is going on a refresher training period with Bayern Munich after the 2019 Africa Cup of Nations. We have a long-term plan with him.

“We have had rocky and difficult moments in our relationship, but this is normal in any relationship between two people.

“He is a good coach and we want him to remain with us. That said, we will work together on what needs to be improved upon.”

The 63-year-old Rohr, who was appointed as Super Eagles boss in 2016, qualified and led Nigeria to the 2018 FIFA World Cup Russia, where they bowed out after the group phase.

Nigeria will tackle Tunisia on Wednesday evening for the third place in the competition.