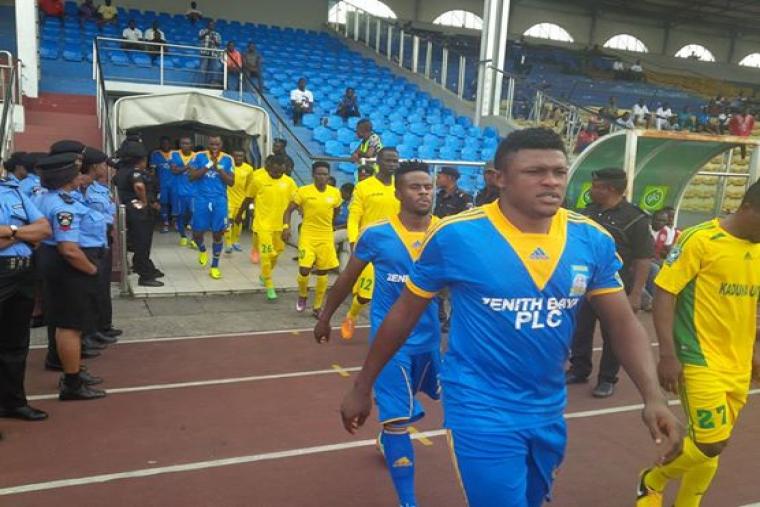 The Nigerian Professional Football League is the highest level of the football league system in Nigeria, for the Nigerian Club-football Championships and is organized by the League Management Company (LMC).

Hey, look here and you'll know who is the highest-paid player in Nigeria premier league.

“Nigerian Professional League” is what it was called between 1990–1993. Nigerian National League – First Division was the name between 1979–1990.

And “the (Nigerian) National League” or “Nigerian Football League” was what it was known as between 1972–1979.

Let's take a look at them.

Godwin Obaje was the top scorer of the last season of Nigeria Premier League.

Born in Nigeria in 1997, Obaje is now the highest paid player in the league. Obaje has joined Etoile du Sahel of Tunisia. This was a long-term deal from Wikki Tourists.

The 22-year-old has signed a four-and-a-half-year deal with the Tunisian club and he said that the club has tremendous confidence in him as a striker and that he is hopeful of delivering.

Obaje scored 18 goals in the 2016 season and thereby enabled Wikki Tourists to finish at third place.

When we speak about the Nigeria Premier League top scorers the first name that comes to our mind is Mfon Udoh who had scored 23 goals to his credit.

In addition to the Nigerian national team, Udoh plays as a forward for Akwa United also.

His pace, exact positioning, finishing in the most natural style and the skill to provide assists make him a complete forward.

This 27-year old Nigerian football player is the best striker of NPFL. Udoh received the golden boot award for the top NPFL scorer.

He created a record by scoring 23 goals for the People's Elephant of Aba and during 2013 – 2014, most of the League's individual awards were grabbed by Mfon Udoh.

He was the highest goal scorer in Enyimba's CAF Champion League campaign in 2016 in spite of his injury as well as lack of playing time.

Udoh was formerly the captain of the Aba-based Enyimba International. Ahead of the 2018 – 2019 season, he rejoined Akwa United.

Mfon Udoh is the all-time highest scorer in a single season in NPFL. Critics refer to Udoh as a “local champion” since so far he has not played out of Nigeria.

But, while speaking to journalists Udoh said that his chance to play abroad will come someday.

The Nigerian forward who is now playing for Ikorodu United F.C. was born in the year 1990.

In 2016 he came back to Nigeria and played for Ikorodu United F.C.

When the Egyptian Premier League side, Al Masry refused to pay a transfer fee to this Nigerian forward, FIFA slammed Al Masry and ordered the club to pay him $140,000.

Aneke won the Nigerian Super Cup in 2010 and in 2012 he was the top scorer of Nigeria Premier League.

Victor Namo, also known as V.I.C, is a Nigerian football player who was born in the year 1988 in Jos.

The 30-year-old started his football career with Yobe Desert Stars and he joined Kano Pillars F.C. in the year 2006.

Namo became one of Nigeria Premier League top scorers during his career in Kano Pillars Football Club from 2006 to 2012.

The Jos-born player helped Kano Pillars to win Nigerian Premier League for the first time in 2007 – 08. In 2007, Victor scored 7 goals in the CAF Champions League.

In the 2011-2012 season, Victor Namo helped Kano Pillars to win their second league title and after that season he left Kano Pillars and joined Nasarawa United.

Victor emerged as the top scorer in the league by scoring 19 goals on behalf of Nasarawa United.

The striker left Nigeria in 2014 and joined Al Ahly Benghazi of the Libyan Premier League, but does he qualify as the highest goal scorer in Nigeria league 2018? We'll find out.

SEE ALSO | List Of Super Eagles Players: All Names From Inception Till Date

The 25-year-old forward plays for Kano Pillars which was one of the top 3 teams in Nigeria Premier League of 2018.

Lokosa joined Kano Pillars in 2017 prior to which he was playing for First Bank Nigeria.

This centre-forward player was born in Nigeria in the year 1993.

Lokosa scored 24 goals during his career in Kano Pillars.

The former First Bank player was also awarded the title “Eunisell Boot” when he became the top scorer of Nigeria Premier League in 2018.

Ibrahim Sanusi of Nasarawa United was declared the highest goals scorer in the just-ended regular season of the Nigeria Professional Football League (NPFL).

Sanusi, 17, tied with Akwa United’s Mfon Udoh on ten goals at the completion of matches going into the Championship Playoff to determine the season’s Champions.

The League Management Company (LMC) arrived at the decision to declare Sanusi the top scorer of the season by relying on provisions in Rule A9.4, A9.5-2 which stipulates considerations to choose the lead scorer in the event of a tie of two or more players.

Disciplinary records which is the second consideration to break a tie favoured Sanusi as he only bagged a yellow card all through the season as against the two recorded for Udoh.

This season would have been the second time that Udoh would finish as top scorer had he clinched the award.

He however still holds the record of the most goals in the league for a season after he scored 23 goals in the 2013/14 season playing for former Champions, Enyimba International.

So now, you know who the NPFL highest goal scorer 2019, right? As you can see from the list above, Sunusi Ibrahim is the current Nigeria Premier League top scorer.