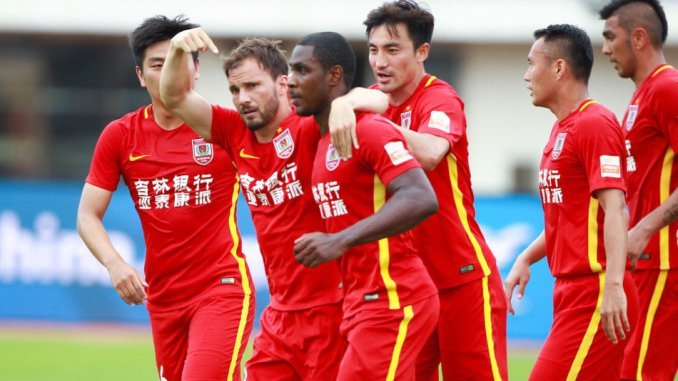 Nigeria’s Odion Ighalo scored his 18th Chinese Super League goal of the season for Changchun Yatai who lost at home 5-2 to Jiangsu Suning FC at the Changchun Stadium in Jilin, China on Saturday.

Changchun Yatai have failed to win in their last two CSL matches.

An own goal from Jie Sun in the 13th minute gave the visitors, Jiangsu Suning FC, the lead before Alex Teixeira doubled the lead in the 27th minute before the break.

Pengfei Xie made it 3-0 in the 54th minute before the Super Eagles striker reduced the deficit from the spot after he was pulled down by Ang Li in the penalty area.

The goal was Ighalo’s 18th in 24 CSL start for Changchun Yatai.

Eder Baiano struck in the 78th and 88th minute to make it 5-1 for Jiangsu Suning FC before Yufeng Xiao scored Changchun Yatai’s second goal in the stoppage time of the defeat.

Ighalo will likely keep his place in the Super Eagles squad when Gernot Rohr announces his team for Nigeria’s 2019 Africa Cup of Nations qualifier against Libya in October.