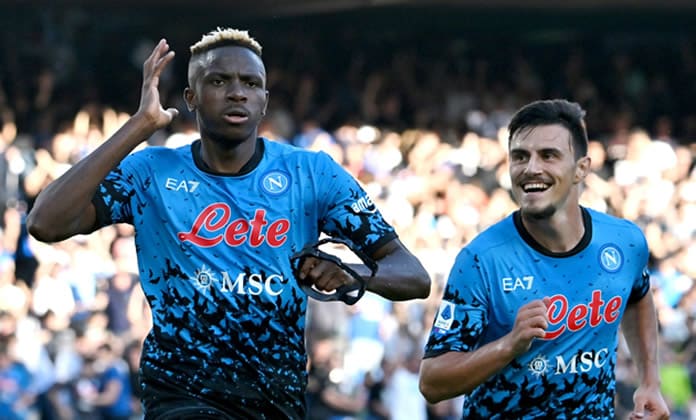 Napoli manager Luciano Spalletti has praised his forward Victor Osimhen after the Nigeria international notched his first club career hat-trick in the 4-0 drubbing of Sassuolo at the Diego Maradona Stadium on Saturday.

Spalletti was full of special praise for Osimhen’s first goal, and deservedly, as it was simply stunning.

The former Lille forward showed good athleticism to bring a high cross under control with his first touch before reacting quickly to poke the ball into the net with his second touch.

It was not just the goal that pleased Spalletti but it also showed the Italian manager that Osimhen has the qualities that put him above an average striker.

“It seems to me that he is making progress, he has a lot of margins because his possibilities and his flashes are not accessible to a normal player,” Spalletti told the media after the match.

“On the goal, he hooked a ball in the area and put the ball into the goal before the opponent intervened. He was fast and accurate. Then today he didn’t take off his shirt, because he would have wanted to take it off.”

Osimhen ended the match with a rating of 9/10 from AreaNapoli with their statement reading, “Victor is a savage, he must be given the freedom to break in, devastate everything, even his feet which can be “ferocious” and “feathery”. Against Sassuolo he leafed through all the best shots in his repertoire out of print; the flying splits to stop a ball before scoring, opportunism after a tribal dance in the area and the shot under tight contest. What do you want to tell him if not a “go ahead boy,”

Despite spending a month on the sidelines due to injury, Osimhen now sits at the top of the Serie A goalscorer’s chart with seven league goals.

Since his return from injury, the 23-year-old has scored in five consecutive games against Ajax, Bologna, Roma, and Sassuolo.