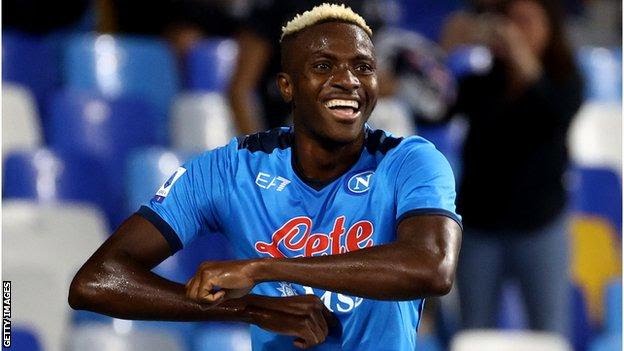 Nigerian ace goalscorer, Victor Osimhen, scored Napoli's only goal on Sunday as The Naples move top of the SerieA table and maintaining their hundred percent winning record to the SerieA season after Matchday eight.

The Nigerian striker has now scored five goals in the league this season and he's on a seven-match scoring spree after hitting the bull's eye against a stubborn Torino side on Sunday.

The action-filled match was destined to end in a barren draw but the former Lille and Charleroi forward proved to be the difference when he scored in the eighty-first minute to send the crowd into a frenzy.

His goal came off a rebound inside the six-yard box and produced a towering header to alter the score to make it 1-0 for his team.

Torino did frustrate the efforts of Luciano Spaletti's men in the early stages of the tie, keeping things right at the defence and forcing the hosts to send Osimhen hunting for percentage passes.

Napoli continued to grow into the game, fashioning half-chances from wide areas and overloading in search of a lead before halftime, but Torino hung on.

Ultimately, Osimhen’s late strike, however, did the magic as Napoli took all three points.