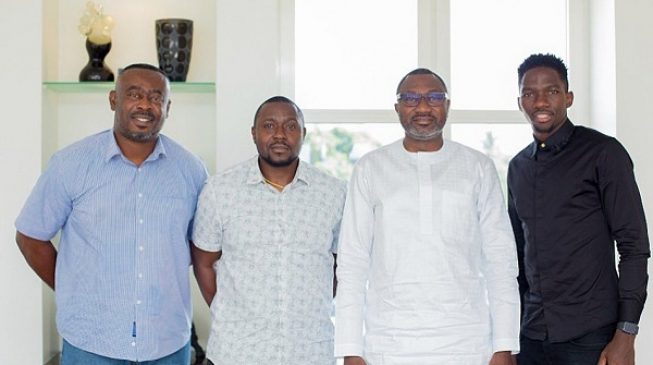 The $25,000 per goal pledge made by Nigeria oil mogul Femi Otedola to the Super Eagles, before the 2019 Africa Cup of Nations semi-final clash against the eventual champions Algeria has been fulfilled.

Before the match against the Desert Foxes of Algeria, Otedola and Aliko Dangote pledged to pay the sum of $25,000 and $50,00 respectively for each goal scored.

Sadly, Nigeria failed to score more than a goal in the game, as  Man City forward Riyad Mahrez scored a last-minute goal from a free-kick to send Algeria to the final.

However, on Tuesday, the Nigeria Football Federation (NFF) took to its Twitter page to state that Otedola has redeemed the promise to the Super Eagles.

“Business mogul Femi Otedola has fulfilled his pledge of $25,000 to the @NGSuperEagles for their one goal against Algeria in AFCON 2019 semi-final. Seen here on Tuesday with defender @omeruo22 (r), Team Administrator Enebi Achor (second l) and Equipment Manager Chidi Ngoka (l),” NFF tweeted with a photo (above) so captioned.

Nigeria finished the competition with a bronze medal after beating the Carthage Eagles of Tunisia 1-0 in the playoffs.