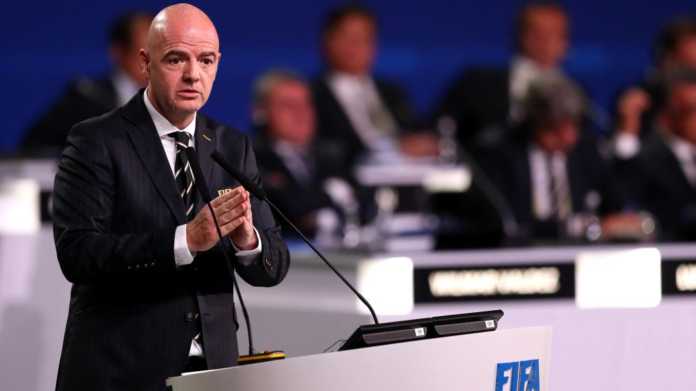 Infantino’s tenure will terminate in June 2019, but according to footballlive.ng, Pinnick and other CAF top shots on Sunday backed the FIFA boss for a second term in office.

This came at CAF’s 12th extraordinary general assembly in Egypt, where the continental body’s president, Ahmad Ahmad pleaded with delegates to throw their weight behind Infantino for another term.

Ahmad, however, regretted the poor performance of African teams at the 2018 FIFA World Cup in Russia, where none of the five teams (Egypt, Morocco, Nigeria, Senegal, and Tunisia) could pass the group stage.

He also called for support to Lydia Nsekera, FIFA Council member, who has declared her intentions to contest for the presidency of Association of National Olympic Committees of Africa (ANOCA).

Ahmad then called on the president of Royal Moroccan Football Federation, Fouzi Lekjaa, who is also CAF’s third vice president, to formalize the continent’s support.

“On behalf of my colleagues, I gladly announce that the delegates are in support of the second mandate for FIFA President, Gianni Infantino.

“You have shown great commitment to the activities and development of African football, and we would like to give you more time to further your reforms,” Lekjaa declared.

In his reply, Infantino said: “The support for another term means a lot to me. Africa is the future.

“FIFA is committed to developing Africa’s passion for football via the FIFA Forward so the game can reach its potential in each African nation & everyone who wants to take part can do so without barriers.

“I’m happy and proud that CAF embraced VAR. It shows that CAF is in line with modern trends of football. VAR did not change football; rather VAR has helped football and referees.”