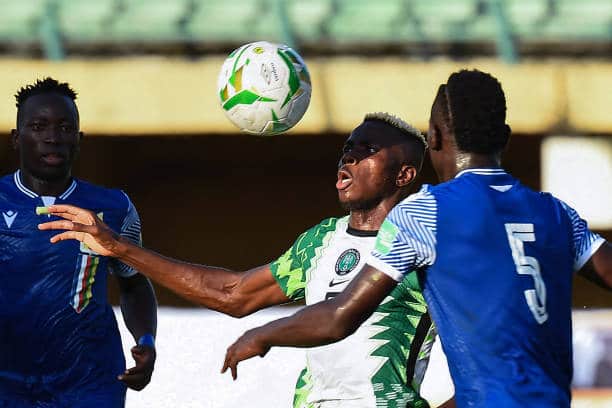 The Central Africa Republic coach, Raoul Savoy has blamed bad officiating to the team's 2-0 loss against the Super Eagles in a 2022 FIFA World Cup qualifiers on Sunday.

Recall that the team defeated Nigeria 1-0 at the Teslim Balogun Stadium, Lagos and was hoping to replicate the feat in a bid to brighten their chances of qualifying for the mundial.

Leon Balogun and Victor Osimhen both scored as Nigeria defeated Central Africa Republic 2-0 in the second of leg of the World Cup qualifier at the Stade omnisport de Douala on Sunday.

“My players did well and I’m very proud of their performance,” he said in his post-match analysis.

“Nigeria played with 12 men because the referee helped them to win. The first goal was from an offside position and my goalkeeper was fouled for the second goal.

“We did not concede against Nigeria over the two legs, they scored with the help of the referee.”