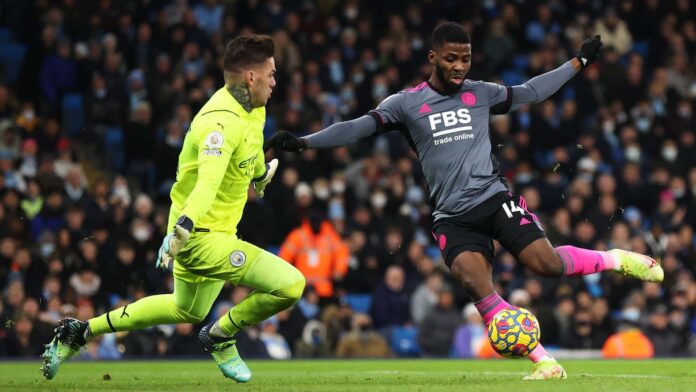 Nathan Tella, Eberechi Eze and Michael Olise were absent for their teams.

Amid the Corona virus-induced match postponements in the English Premier League this weekend, some matches went ahead as planned. The boxing day matches were exciting, as they produced plenty of goals. The postponed matches meant that a few Nigerians did not get to play.

With Watford and Everton not playing, it fell to the contingent at Leicester to fly the country’s flag high.

On the winning side

The only teams with a Nigerian on the winning side on Boxing Day were Southampton and Arsenal. Nigerian winger Nathan Tella was nowhere near the action. According to Southampton coach Ralph Hasenhuttl, Tella and a host of other players were absent due to Covid-19.

In his absence, Southampton was still able to overcome the might of West Ham United in a tie that served five goals.

The 3-2 victory came with Moi Elyounoussi shooting the Saints into the lead in the eighth minute. West Ham equalized through Michail Antonio three minutes after the break. Ward-Prowse restored Southampton’s lead before Said Benrahma made it 2-2 on 64 minutes. The winning goal came courtesy of Jan Bednarek with six minutes left to play.

Arsenal handed Norwich a thrashing at Carrow Road. The Gunners were in splendid form in the 5-0 victory. Goalkeeper Arthur Okonkwo and Folarin Balogun were absent.

Saka scored Arsenal’s first goal in the 6th minute, while Kieran Tierney doubled the advantage before halftime. Saka got a second goal in the second before Norwich City’s woes was compounded by Lacazette and Emile Smith Rowe.

Leicester City took on league leaders Manchester City at the Etihad Stadium. It was an exciting loss that produced nine goals. Kelechi Iheanacho returned to the starting lineup, making his first Premier League start in almost two months. Iheanacho covered himself in glory despite the 6-3 loss to his former side.

Ademola Lookman was also in action, forming a third of Leicester City’s attacking trident. Wilfred Ndidi was an onlooker for 90 minutes as he was confined to the bench.

With six changes made to the Leicester team that played Liverpool midweek, Manchester City cruised to a 4-0 lead by halftime. The goals came via Riyahd Mahrez, Ilkay Gundogan, Raheem Sterling and Aymeric Laporte.

Leicester responded in the second half with goals from James Maddison in the 55th minute. Four minutes later, Ademola Lookman brought Leicester within two goals of Manchester City. Kelechi Iheanacho had provided the assists for the two goals, and in the 65th minute, he went from provider to scorer. It all came to nought as City extended their lead again in the 69th and 87th minute.

Tottenham Hotspur tore apart Crystal Palace at the Tottenham Hotspur Stadium. Goals from Harry Kane, Lucas Moura and Heung-Min Son secured a 3-0 victory. Nigeria targets Eberechi Eze and Michael Olise were notably absent. Eze is yet to feature for the side since returning from an Achilles injury.

Frank Onyeka came on in the 46th minute as Brentford lost 2-0 Brighton and Hove Albion.