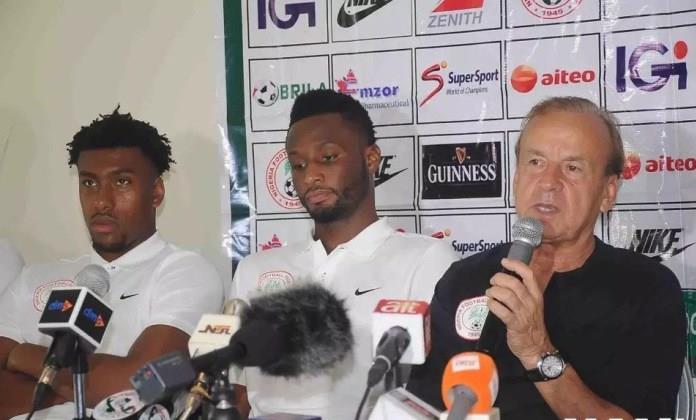 Former Super Eagles captain Mikel Obi tried to get Alex Iwobi dropped from the starting XI during the 2019 Africa Cup of Nations (AFCON), a new report has revealed.

Mikel Obi and Iwobi played together only once during the tournament in Egypt and it has been revealed that the then captain wanted his teammate dropped because he was encroaching on his space on the pitch.

It was British-Nigerian journalist Osasu Obayiuwana who reported the incident after a conversation with Super Eagles coach Gernot Rohr at his base in Bordeaux.

Obayiuwana revealed that Mikel made the demand after the first game of the tournament.

The veteran midfielder played as the No 10 in that game before he was taken off in the 58th minute while Iwobi played from the left side of the Super Eagles attack.

The then Super Eagles captain was however not pleased with how Iwobi was cutting into the middle and felt that his teammate was ‘cramping his playing space and style' and wanted him dropped although Rohr refused the demand.

The fallout also made it easy for Rohr to drop Mikel from the starting XI after two underwhelming performances in the group stage.

According to Obayiuwana, Rohr had found it difficult to use Mikel as a bit-part player in Egypt even when the midfielder had to join Super Eagles camp in bad physical condition.

“After (Mikel’s) top-grade performance with (Middlesbrough) in the championship, it was thought that he would exhibit the same form during the (AFCON 2019),” Obayiuwana narrated on Twitter.

However, after Mikel’s underwhelming performance in Nigeria’s first game and the fallout over Iwobi, Rohr now had good reasons to drop his captain from starting XI.

The former Chelsea star was given another opportunity in Nigeria’s third group game but he performed poorly again. He didn’t play another game at AFCON 2019.  Iwobi started all other games in the No. 10 role.