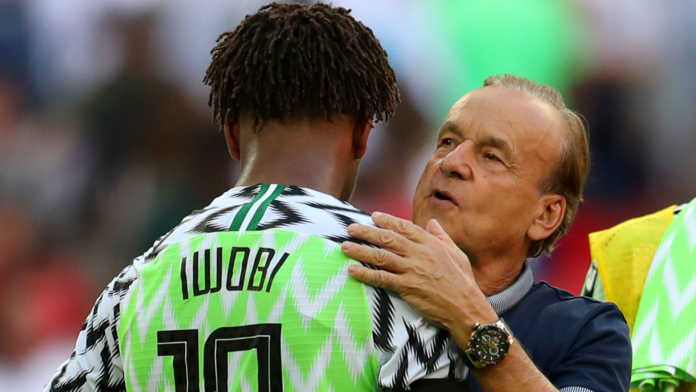 Super Eagles head coach, Gernot Rohr has announced Nigeria 23 man squad for South Africa and says he will be using a 3-5-2 formation in today’s (Saturday) 2019 Africa Cup of Nations qualifying fixture against the Bafana Bafana.

The long-anticipated match kicks off at 2pm Nigerian time this afternoon and the team are raring to go with great motivation.

Ikechukwu Ezenwa, John Ogu and Kelechi Iheanacho are expected to be handed starting shirts in the Rohr’s formation for the game.

Ezenwa is coming in for the injured Francis Uzoho, while Ogu is favoured for a starting berth following Wilfred Ndidi’s suspension and Ogenyi Onazi’s snub by Rohr.

Ogu, who plays for Israeli club, Hapoel Be’er Sheva will be supported in the middle of the park by Oghenekaro Etebo and Alex Iwobi, who will be playing the number-10 role.

Kenneth Omeruo who sat out the Super Eagles’ previous qualifier against Libya will pair the duo of William Troost-Ekong and Leon Balogun in the heart of the defence.

Bordeaux of France winger, Samuel Kalu who was the last player to arrive the Eagles in camp in Asaba ahead of the match, has been picked ahead of Ola Aina to play in the formation’s right-wing-back position.

Jamilu Collins who made his debut for the Super Eagles last month against Libya will retain his position on the left side of the defence ahead of Locomotiv Moscow of Russia defender, Bryan Idowu.

The formation will also have the duo of Ahmed Musa and Kelechi Iheanacho spearheading the Eagles’ attack in the absence of injured top striker, Odion Ighalo.

Rohr’s men top Group E with nine points, one more than South Africa and a win in the encounter would see them return to the Africa Cup of Nations after missing the last two editions.