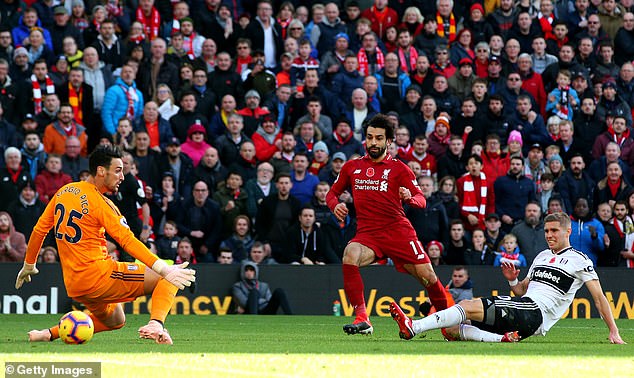 Just thirteen seconds after Fulham thought they had taken a stunning lead at Anfield on Sunday, they found themselves 1-0 down.

The assistant referee controversially flagged the striker offside and after Liverpool goalkeeper Alisson Becker played the ball out to Mohamed Salah, the Egyptian raced clear before slotting past Sergio Rico.

Fulham defender Denis Odoi was beaten for pace by Salah and he showed composure to lift the ball over Rico in the Cottagers goal. It was the big talking point of the first half with Fulham outraged to have had Mitrovic's header ruled out with the striker appearing to be in line with Liverpool's Andrew Robertson.

The former Fulham goalkeeper was convinced the goal should have stood and believed the linesman guessed when making the decision.

They have taken a quick free-kick and I think Denis Odoi has tried to play offside because he can't keep pace with Salah.